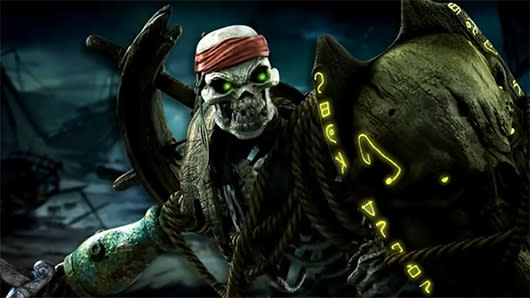 Spinal, the first downloadable addition to the Killer Instinct roster has arrived, lending the anemic fighting game a bit more depth - or at least a few more bones to break.

While the Xbox One Killer Instinct is extremely light on backstory, the first two Killer Instinct games claim that Spinal is the reanimated skeleton of a long-dead warrior. Ultratech, the firm responsible for funding the Killer Instinct tournaments, revived the skeletonic fighter to serve as something of an undead goon, wreaking havoc in the tournament and ensuring that Ultratech's wishes were carried out. According to Xbox Wire, this new design for the character draws inspiration from classic Harryhausen adventure film Jason and the Argonauts, which is fitting given that the ending of the original Killer Instinct claimed that Spinal eventually left the world of combat sports in favor of a career as an Oscar-nominated actor.

Those who purchased the Killer Instinct Ultra Edition bundle or Combo Breaker Pack are now able to download Spinal at no additional charge. Everyone else will need to pony up $5 for the calcified revenant.
In this article: dlc, double-helix, killer-instinct, killer-instinct-2013, microsoft, rare, spinal, ultratech, xbox-one
All products recommended by Engadget are selected by our editorial team, independent of our parent company. Some of our stories include affiliate links. If you buy something through one of these links, we may earn an affiliate commission.