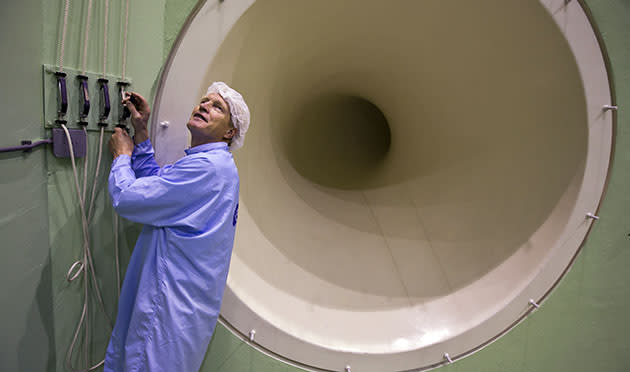 Sure, your stereo may go up to 11 and beyond, but you probably couldn't murder your listeners with it. The European Space Agency has a bigger budget, however, and its Large European Acoustic Facility (LEAF) has a 36-foot wide by 54-foot high wall of sound designed to simulate the level of noise during a rocket launch. To be exact, it can produce more than 154 decibels by shooting nitrogen into the horns, which the agency says is the same as standing right next to multiple jets taking off at the same time. It added that "no human being could survive hearing it at maximum output" (presumably because of the overall power), so the walls are epoxy-coated, reinforced concrete. The giant system is designed to stress-test pricey satellites before attaching them to actual rockets, and hopefully avoiding some of the many, many things that can go wrong.

In this article: ESA, EuropeanSpaceAgency, LargeEuropeanAcousticFacility, LEAF, rockets, Satellites, SoundSystem
All products recommended by Engadget are selected by our editorial team, independent of our parent company. Some of our stories include affiliate links. If you buy something through one of these links, we may earn an affiliate commission.