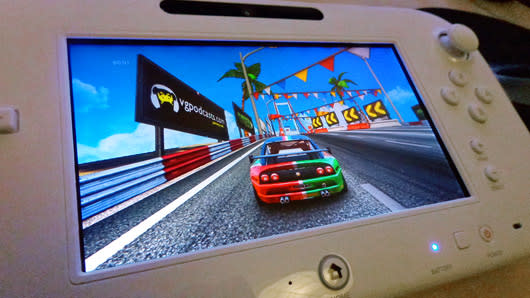 The '90s Arcade Racer publisher Nicalis details its latest development milestone in a recent status update, reporting that the Wii U port of its throwback racing game is shaping up nicely as it speeds toward a mid-2014 release.

"Fidelity, image quality and a smooth framerate are our priorities," Nicalis explains. "Wii U is proving very capable of running the game at 60fps at 720p with 4xMSAA and FXAA resulting in a crystal clear image."

Funded last year by a successful Kickstarter project, The '90s Arcade Racer aims to recreate the sheer speed and blue-skies atmosphere that defined classic Sega racing games like Daytona USA and Super GT. The game's development team later partnered with Cave Story publisher Nicalis for assistance with Unity programming, physics, and production. The '90s Arcade Racer is due for a digital release this year for the Wii U, Windows, Mac, Linux, iOS, and Android platforms.
[Image: Nicalis]
In this article: android, ios, ipad, iphone, mac, mobile, nicalis, nintendo, pc, release-date, the-90s-arcade-racer, wii-u
All products recommended by Engadget are selected by our editorial team, independent of our parent company. Some of our stories include affiliate links. If you buy something through one of these links, we may earn an affiliate commission.