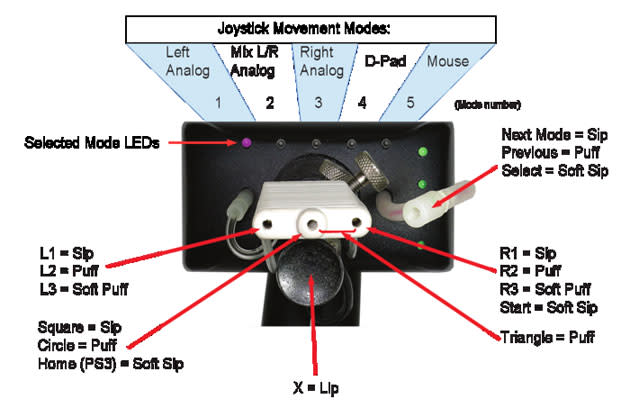 Playing PS3 games could soon get a little more inclusive. QuadStick, a suitably complex mouth-based controller that offers quadriplegics the ability to play console games, has launched its fundraising campaign on Kickstarter. The controller is composed of a single joystick, four sip-and-puff sensors, a lip position sensor and a push switch, all hooked into a 32-bit ARM processor that outputs to both USB and Bluetooth, and then to gaming hardware. And it's not just for PCs: it'll work with Android devices and PS3s too. (If you have the right adapter, it'll also hook-up to both Xbox Ones and 360s.) Which input is assigned to which in-game button is configurable, although there's several prearranged setups built into the Kickstarter controller, too. The user can use the straws to shift between different control methods, deciding whether to control the left analog stick, the d-pad or navigate using a mouse cursor.

Gamers would also be able to use third-party voice recognition suites (like Dragon Naturally Speaking), to add in voice commands too. These could calibrated to pick up word commands and convert them into game-specific actions -- just because triangle is 'jump' in one game, it typically isn't in another. The roots of the project came from Ken Yankelevitz's Quad Control Joystick, with Davison then tweaking and adding to the base design while getting consistent feedback from quadriplegic gamers. Ensuring the mouthpiece fitted correctly was apparently one of the biggest challenges, but it's already working with the likes of Call of Duty -- there's a video of exactly that after the break. At the moment, there's five working prototypes, and if the product reaches its funding goal of $10,000, it aims to make at least 25 units, with plans to scale up depending on how much is raised: the project's already reached over $3,000.

In this article: disability, gamescontroller, kickstarter, pc, ps3, quadriplegic, quadstick, video
All products recommended by Engadget are selected by our editorial team, independent of our parent company. Some of our stories include affiliate links. If you buy something through one of these links, we may earn an affiliate commission.