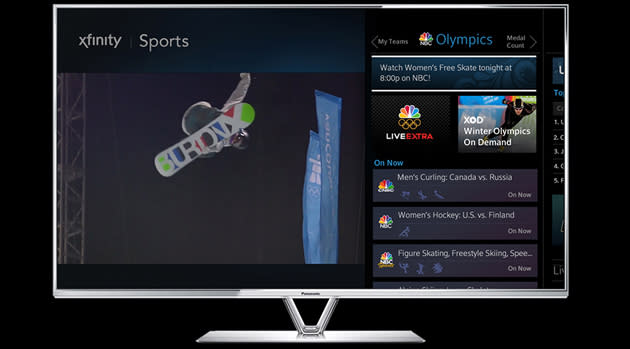 By its nature, conventional TV offers limited coverage of large sports events like the Olympics -- much to the chagrin of fans. Comcast's Xfinity TV subscribers won't have that problem with the Sochi Olympics, though. The cable giant is bringing its NBC Sports Live Extra app to X1 set-top box owners for the first time, giving them 1,000 hours of live Olympics video streams that would previously have required a desktop browser or a mobile app. Comcast is augmenting its regular coverage with recent technology as well. X1 users in some regions will get to watch prime-time coverage through Xfinity On Demand as soon as the programming begins, and all Xfinity TV customers can use SeeIt to switch to an Olympics broadcast when it's mentioned on Twitter. While we'd like to see the NBC app available through other TV providers, it's still good news for athletics enthusiasts who insist on big-screen viewing.

In this article: comcast, hdpostcross, nbc, nbcsportsliveextra, olympics, sochi, sports, television, tv, WinterOlympics, x1, xfinitytv
All products recommended by Engadget are selected by our editorial team, independent of our parent company. Some of our stories include affiliate links. If you buy something through one of these links, we may earn an affiliate commission.