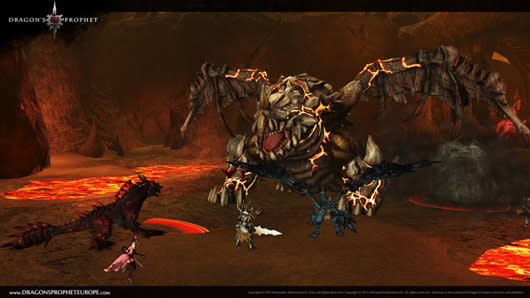 Dragon's Prophet players in Europe will soon have a new way to influence their game: the Osiran Council. This player-elected body will give the community more influence over Dragon's Prophet EU's future development. Those who want a seat on this council in order to weigh in on game-relevant decisions, assist in the development and publishing process, and submit suggestions and criticisms directly need to send an email to community@dragonspropheteurope.com with the following information:Today's patch also introduced the Dragon Compendium for the European community. This feature contains valuable information on all dragons that can be captured as well as resources to upgrade your dragon with other elite skills. SOE also announced a new zone, Olandra, as well as updates to the treasure hunt, mounted combat, and class systems.

[Source: Infernum Productions/SOE press releases]
In this article: dragon, Dragon-Compendium, dragons, dragons-prophet, Dragons-Prophet-EU, Dragons-Prophet-Europe, housing, infernum, infernum-productions, Osiran-Council, player-council, runewaker, runewaker-entertainment, soe, sony, sony-online-entertainment
All products recommended by Engadget are selected by our editorial team, independent of our parent company. Some of our stories include affiliate links. If you buy something through one of these links, we may earn an affiliate commission.