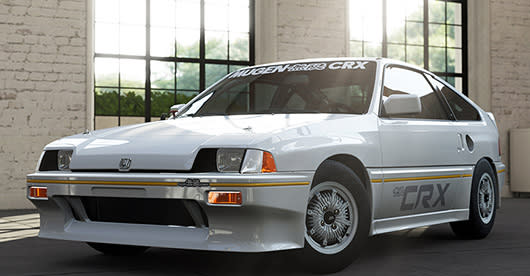 Created to celebrate the real-world unveiling of Honda's 2014 Civic Si, the Honda Legends Car Pack includes three cars: the aforementioned Civic, the 1984 Honda Civic CRX Mugen and the 1994 Honda Prelude Si. "All three of these cars represent the excitement and pure driving spirit that embodies Honda cars," says the Pack's description on the official Forza 5 website.

Acquiring the Honda Legends Car Pack is as easy as finding and downloading the DLC on the Xbox One marketplace. As is standard for Forza 5 DLC, this will introduce the three cars into the game's dealership, where they can be purchased using your race winnings or by exchanging real-world cash for the requisite number of tokens. Still, it's free to get the pack inside the dealership.
[Image: Turn 10 Studios]
In this article: dlc, forza, forza-motorsport-5, honda, microsoft, turn-10, turn-10-studios, xbox-one
All products recommended by Engadget are selected by our editorial team, independent of our parent company. Some of our stories include affiliate links. If you buy something through one of these links, we may earn an affiliate commission.