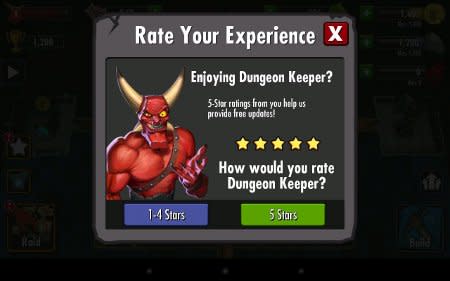 Players who did not enjoy EA's free-to-play Android version of Dungeon Keeper found themselves unable to voice their displeasure in the days following its release, as Pocket Gamer discovered that the game actively discourages less-than-perfect ratings via Google Play.

After playing Dungeon Keeper for several minutes, an in-game pop-up requests a Google Play rating, giving players the option of submitting either a 5-star vote or a rating of 1-4 stars. Choosing the "5 Stars" option lets users proceed through the ratings process normally. Selecting the "1-4 Stars" option prevents users from submitting a rating at all, instead confronting them with a request for direct feedback – a result akin to voting in a Pawnee election.

Players can still rate Dungeon Keeper directly via Google Play, however, and nothing prevents users from submitting a lower rating after pressing the in-app "5 Stars" button. The game currently sits at an average rating of 4.3 stars out of 5.

Speaking to Eurogamer, an EA Mobile representative defended the tactic as a method to encourage detailed player feedback. "The 'rate this app' feature in the Google Play version of Dungeon Keeper was designed to help us collect valuable feedback from players who don't feel the game is worth a top rating," the representative said. "We wanted to make it easier for more players to send us feedback directly from the game if they weren't having the best experience. Players can always continue to leave any rating they want on the Google Play Store."
[Image: Electronic Arts / Pocket Gamer]
In this article: android, dungeon-keeper, ea-mobile, electronic-arts, free-to-play, google-play, mobile
All products recommended by Engadget are selected by our editorial team, independent of our parent company. Some of our stories include affiliate links. If you buy something through one of these links, we may earn an affiliate commission.