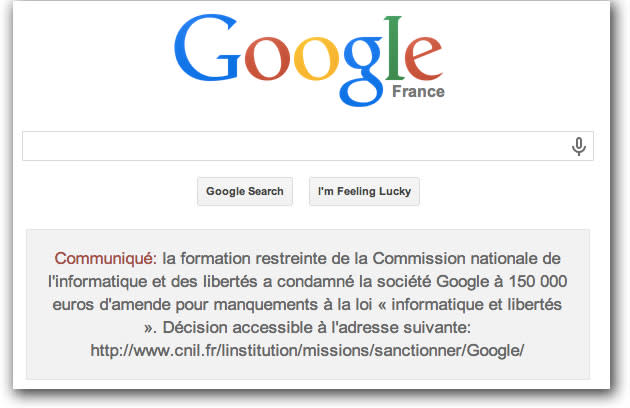 France and Google are playing a delicate game of brinkmanship in the courts of Europe, and it still isn't clear who'll come off worse. France fined the search company €150,000 ($200,000) last month as a penalty for failing to tell French citizens exactly what happens to their personal data. Google could have coughed up the trivial sum and drowned its sorrows in a bottle of beaujolais, but instead it has decided to fight -- not because of the money, but because accepting the fine would have also involved making a public admission of guilt (published below the search button in a size 13 font, no less) and the company feels this would have "irreparably damaged" its reputation.

Google's legal appeal against the fine appears to rest on creating a rift between France and the European Union, because it claims its privacy policy meets EU requirements and shouldn't have to be amended to suit one European country. (Although, to be fair, many other European countries have also complained about it.) So, here's the risk: What is currently a dispute over fines and typefaces could theoretically -- in the worst case scenario -- escalate into another international court case that runs on for years, or it could even become a question of sovereignty that risks causing France to lose face. Some of this is doomsday-ish speculation on our part admittedly, but Google's well-funded legal department doesn't look ready to quit any time soon.

Update: Well, that didn't last long -- a French court has already rejected Google's appeal, telling the search giant that it failed to show that the original order was illegal, at risk to the public interest or that it would cause permanent damage to Mountain View's financial interests. Google can still appeal the fine, but it's been forced to post a public admission of guilt on the Google.fr homepage, read on for a translated version.

A special branch of the CNIL has fined Google 150,000 euros for breaking the laws of "information technology and liberty." See the full decision at http://www.cnil.fr/linstitution/missions/sanctionner/Google/

In this article: france, google, google.fr, lawsuit, privacy
All products recommended by Engadget are selected by our editorial team, independent of our parent company. Some of our stories include affiliate links. If you buy something through one of these links, we may earn an affiliate commission.