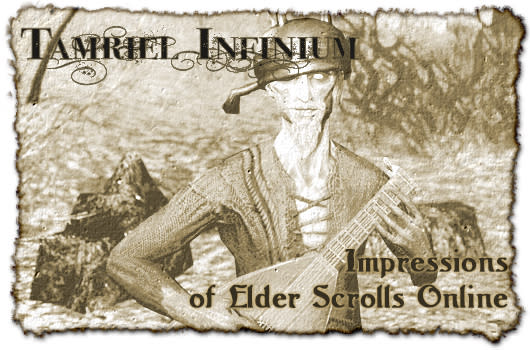 This past weekend, ZeniMax invited the press to play its addition to the Elder Scrolls franchise: The Elder Scrolls Online. We were allowed to play any faction or race that we wanted, with the exception of the newly introduced Imperial race. We took video and screenshots. We truly wanted to see whether this game lived up to our expectations for the series, and most of all, we wanted to know why this game has hidden behind an NDA for much longer than its closest competitors.

Not everyone is going to love The Elder Scrolls Online. Many of the things you find in ESO coordinate with existing MMOs, but it also has its own twists on certain aspects of the genre. Although I didn't find every moment a thrilling dive into the world of Tamriel, I did enjoy myself, and I can certainly see myself playing this game for a while.

For the next few minutes, I would like to put aside the marketing strategy and the issues I have with the payment model and preorder bonuses. Let's examine just the story and the characters in the game and take the measure of their worth.

Because this is an Elder Scrolls game, you're required by law to start as a prisoner. But in The Elder Scrolls Online, I began my adventure as a different kind of prisoner, starting in the realm of Oblivion as a captive of the Deadric Prince Molag Bal. The atmosphere was dank and moist. My prisonmates had apparently died a long time ago because all that remained were their bones.

Like most MMO beginnings, the Coldhabour starting zone doubled as a tutorial and setup for the rest of the game. I learned how to operate my character with WASD and why I was a prisoner in Molag Bal's dungeon of horrors, all from a man calling himself the Prophet (voiced by Dumbledore aka Michael Gambon). Then a scaly humanoid -- Elder Scrolls fans know them as Argonians -- unlatched my cell door and told me to run, which will be a common theme for the first few levels. The Argonian led me to racks of weapons ranging from a pair of axes to magic staffs. My first time through, I picked a sword and shield, and on my second trip, a bow seemed more appropriate.

As instructed by the Prophet, I found Lyris Titanborn, but truth be told, I didn't feel that I could do anything but find Lyris. It's not as if I had to actually look for her; she stood in my way as I ran down a narrow corridor. I told her in the pseudo-cutscene that the Prophet told me to find her; she replied that we must free him. Of course, our way to him was blocked, and just as in the dreams I used to still have, our only hope was a rambling John Cleese playing a lute. But unfortunately, he served only as exposition.

In my creative writing courses in college, my professors impressed on me the idea that "showing" always outmatches "telling." But it's inevitable, especially in fantasy settings, that the audience will have to be told the story of the land they are watching. It's not a horrible mistake of design, but there are more subtle ways of explaining what's happening instead of inserting a character whose sole purpose is telling you everything you need to know. Alas, very few video games have suffered from good storytelling.

Secondly, I was not shocked at what Lyris had to do. I felt that the writers wanted me to beg her not to do it, then be sad when she did it anyway. (Trying to avoid spoilers here.) But the saddest part was that the events didn't phase me at all. Of course, Cadwell and the Prophet both told me who Lyris was, but because I was not shown who she was until much later, the impact of what she did during the tutorial lost its power.

Thus I finished the starting area for the Aldmeri Dominion and the first two areas for the Ebonheart Pact. Both stories were intriguing enough for me to continue on, but I felt the cast of characters in the Aldmeri Dominion tipped a scale a bit. Perhaps it's because I'm all Norded-out with Skyrim and the Dominion felt fresh and new. The characters had more than two dimensions and didn't seem as dim-witted. Additionally, the overarching story was politically driven, which always intrigues me more.

I can't say that the Nord characters were fleshed out any better than the tutorial characters, but the second time that I ran into the Prophet, he and his associates started to deepen in characterization. I won't spoil anything other than to say that Lyris' (let's call it) sacrifice started to make more sense and became more meaningful.

Based on these early wanderings in the game, I think that if you are looking for a game to fulfill all of your wildest Elder Scrolls dreams, you will be disappointed. And although the storylines started to broaden at higher levels, it never gave me the sandboxy feel that Skyrim and the other Elder Scrolls games gave me. The phasing used in the storytelling, intended to make me feel that there were actually other players around, only made me feel more isolated because I knew that the guy running by me didn't experience the same thing at the same time I did. In fact, the only reaction that I likely received from these passers-by was a raised eyebrow as they wondered why I was just standing there.

The storyline, as in so many other MMOs, centers on the player character. You, yet again, are the star of the show -- just like all the other people running around with you. Is it inappropriate to call this the Tortage syndrome (after Age of Conan's starting zone)? Your being the "only one" who can save the world loses its impact when these thousands of other people are the "only one" as well.

I can't knock ESO completely because the story was good. Its cast of characters was for the most part interesting, and if linear and interesting storylines push your buttons, then you will not be disappointed in the game. The story has more than its fair share of choices, and thanks to the phasing system, my choices could actually affect the world around me. But ultimately, the choices that have the greatest impact on my gameplay revolve around my weapon, armor, and class choices, not the tale being told.

In this article: bethesda, bethesda-softworks, bethsoft, column, elder-scrolls, elder-scrolls-online, eso, featured, First-Impressions, Lyris-Titanborn, preview, previews, prophet, PvE, starting-zone, tamriel, tamriel-infinium, teso, the-elder-scrolls, the-elder-scrolls-online, zenimax, zenimax-online, zenimax-online-studios
All products recommended by Engadget are selected by our editorial team, independent of our parent company. Some of our stories include affiliate links. If you buy something through one of these links, we may earn an affiliate commission.