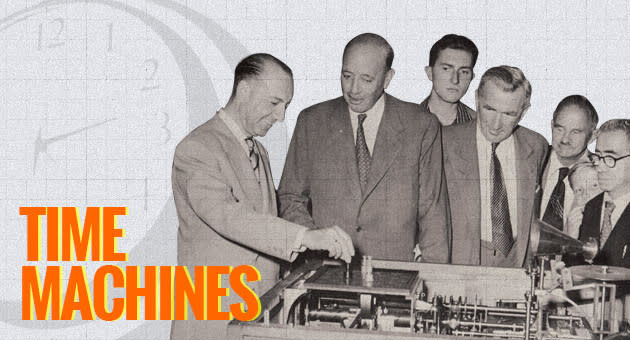 Machines may need to start a union. After all, various deep thinkers have been busy for more than a century dreaming up ways to impart human-like thought processes and capabilities into them, just so they can do more of our work. Familiar names in the annals of computing's history such as Charles Babbage and Alan Turing may stand out, but wedged between those figures on the historical timeline is the perhaps lesser-known Spanish inventor and engineer Leonardo Torres Quevedo. Of his many inventions, one of the most unique is "El Ajedrecista" (The Chess Player), which he presented to the Parisian public in 1914. It was a chess-playing automaton, programmed to stand against a human opponent and respond accordingly to any move they made. It knew if someone was trying to cheat, and took pride in moving its own playing pieces around the board. Most of all, it reveled in announcing a victory against its human taskmasters when it inevitably won the game.

Torres Quevedo was born in the north of Spain in 1852 and by the age of 24, he had graduated school with a degree in civil engineering. According to Harry Henderson's A to Z of Computer Scientists, he seemed to have little interest in the field and was lucky enough to receive an inheritance from a distant relative, allowing him to pursue a range of interests with a certain degree of leisure. Instead of falling into the trap of entitlement and hipsterdom, however, he followed a path that led to mathematics and mechanical inventions.

During the 1890s, he worked on creating machines that could solve algebraic equations, one of which he demonstrated to the French Association for the Advancement of Science in 1895. Around the turn of the century, he patented a semirigid dirigible design, which was employed by the French and English armies during World War I. He even developed a remote control device called the Telekine, which began as a way to trigger mechanical processes through a wireless telegraph, but grew into a concept for controlling machines (from dirigibles to torpedoes) in a bid to save the lives of human operators. His growing savvy with electro-mechanical devices and radio waves made him a contemporary of other like-minded inventors, such as Guglielmo Marconi, Nikola Tesla and Thomas Edison, and even earned him a government subsidy to help open a mechanical laboratory in Madrid.

As Torres Quevedo's research continued, it soon began to veer wholeheartedly into the realm of "thinking" machines. By 1912, his exploration led to "El Ajedrecista," a machine that could carry out complex processes similar to the way a human could. His chess-playing automaton made its first major public debut in Paris in 1914. It was pitted against a single human competitor and played within the confines of a chess endgame called KRK, short for "King and Rook versus King." This first version of the machine was built on an upright panel, with a vertically mounted playing surface and game pieces that jacked into the chess grid like an operator's switchboard. A human player could place their King within a limited range of pre-determined starting points, while the machine's King and Rook consistently started from the same position. El Ajedrecista had been programmed by Torres Quevedo to surmise the location of its opponent's King and followed a system of conditional rules in order to make its moves.

Not only was El Ajedrecista making judgment calls each time its turn came, but it also used mechanical arms to move each of its own pieces around the game board. If the opponent attempted an illegal move, one of three bulbs would light up, halting gameplay until a correct move was made. After three wrong moves, the machine would shut down in disgust, refusing to continue -- similar to the anti-cheat tactics of a pinball machine (Tilt!). A hard reset would be required for gameplay to begin again, hopefully with everyone playing by the rules this time around. In 1920, Torres Quevedo built a second version of the chess automaton. This model had a more approachable horizontal playing surface and its inner workings were tucked away inside a wooden enclosure. This automaton used the same essential programming to play a KRK endgame as the first version, but this time its pieces were controlled by electromagnets. The game board consisted of a smooth playing surface, with metal plates under each square so that it could detect the location of the game pieces. Mechanical arms could control the position of the metal-based pieces by moving the magnet around underneath the game board.

According to George Atkinson's Chess and Machine Intuition, each time the machine's Rook made a move pushing the human opponent's King closer to the edge (and end of the game), a small phonograph played the phrase "jaque al rey" (check to the King). When the machine got the opponent's King into the final game-ending position, the voice repeated the phrase, this time adding a triumphant "mate." And due to Torres Quevedo's skilled programming and mechanical know-how, it did this consistently.

Around 1914, Torres Quevedo released a paper entitled Essays on Automatics, which refers to the work of mid-1800s inventor and mathematician Charles Babbage. Building on Babbage's Analytical Engine (a Victorian-era computing device), Torres Quevedo discusses his own ideas for a "universal automaton." One that could be programmed to do complex human tasks and make decisions based on conditional data in the same manner as processing IF and THEN statements. His chess game was simply a way of testing his ideas for complex thought processes in machines, in a way, an early indulgence in the field of artificial intelligence. In 1951, Gonzalo Torres Quevedo (Leonardo's son), who had been alongside his father in developing the Ajedrecista's second version, displayed the machine at the Cybernetic Congress in Paris. He even demonstrated the device to Norbert Wiener, a well-known figure in the history of machine intelligence.

Torres Quevedo may not be as popularly recognized as Babbage or Turing for conceptual work in the area of computing, but his forward-thinking ideas and inventions did make an impact on the world -- his cable car invention still shuttles tourists across Niagara Falls. Indeed, El Ajedrecista could be considered the first computer game ever built and the Jeopardy appearance of IBM's Watson computer in 2011 could be its modern incarnation. Let's just hope Torres Quevedo's chess player doesn't cross over to the dark side; it would be unnerving to hear a race of robots deliver the phrase "checkmate" right before terminating you. (In an Arnold Schwarzenegger voice, of course.)

In this article: AI, Ajedrecista, Alan Turing, artificial intelligence, automaton, Babbage, Charles Babbage, chess, gear, Gonzalo Torres Quevedo, Leonardo Torres Quevedo, robotics, robots, the chess player, time machine, time machines, timemachines, Torres Quevedo, Turing
All products recommended by Engadget are selected by our editorial team, independent of our parent company. Some of our stories include affiliate links. If you buy something through one of these links, we may earn an affiliate commission.