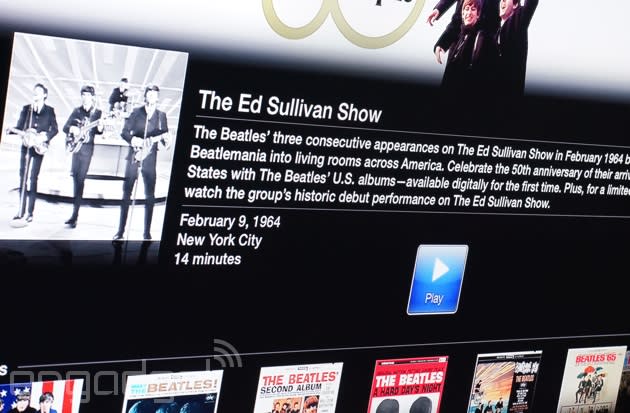 Are you nostalgic for the hysteria when the Beatles first set foot in the US, or just wonder what all the fuss was about? If either is true, you'll be glad to hear that you now have a chance to recreate that commotion on your Apple TV. Apple has quietly launched a Beatles channel on its media hub that will let you stream the British band's entire Ed Sullivan Show performance from 1964, complete with shrieking fans. Naturally, Apple is also using the channel to plug the recently digitized US versions of the group's albums. The concert footage will only stick around for a "limited time," so you'll want to hurry if you'd like to see the Beatles' big moment on a big screen.

In this article: apple, appletv, beatles, hdpostcross, hdpostmini, minipost, music, streaming, television, thebeatles, tv
All products recommended by Engadget are selected by our editorial team, independent of our parent company. Some of our stories include affiliate links. If you buy something through one of these links, we may earn an affiliate commission.