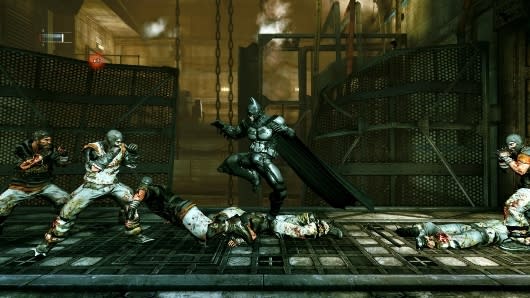 Batman: Arkham Origins Blackgate is lurking in the shadows of the Xbox Games Store, a month after it was caught sneaking around Steam. The Armature Studio-developed 2.5D platformer came to 3DS and Vita alongside the main Origins game, and now it's listed to hit Xbox 360 in an HD "Deluxe Edition," with the release date noted as March 25.

Let's work what this means by channeling the spirit of Adam West. Hmm,... Steam. Take the "s" out of Steam and you get "Team." Teams... soccer teams... soccer teams get the ball into the penalty box to score a goal. Box! And as we all know, X marks the spot. X... Box. Xbox!

The clues all point to a multiplatform arrival in the near future, although we're still waiting on official word from Warner Bros. on any of this. Quick, to the Announcement-mobile!
[Image: Microsoft]
In this article: Armature-Studio, batman-arkham-origins-blackgate, microsoft, Warner-Bros, Warner-Bros-Interactive, WB, WBIE, XBLM, xbox, xbox-games-store
All products recommended by Engadget are selected by our editorial team, independent of our parent company. Some of our stories include affiliate links. If you buy something through one of these links, we may earn an affiliate commission.