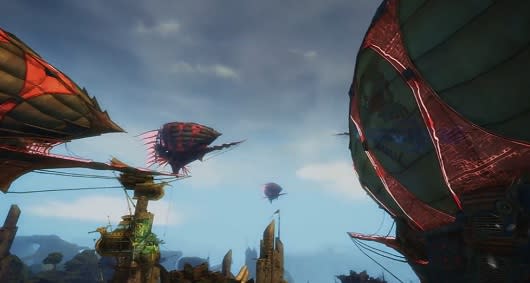 For over 250 years, the city of Lion's Arch has been a place for players of Guild Wars 2 and its predecessor to call home. It's iconic enough that the ruins of the original city can still be explored beneath Sanctum Harbor. Unfortunately, one of Scarlet Briar's mysterious probes has been discovered within those ruins -- and if she gets her way, the people of Tyria may not have to wait very long at all to pick through the ruins of the city's current incarnation.

On February 18th, Scarlet will bring her armies and all of their horrible weaponry to the city in the Escape from Lion's Arch release. Players will join forces with the Orders of Tyria, the allies they've gained through the living world story, and each other to help innocent citizens evacuate and try to mount a counterattack. ArenaNet's Colin Johanson, Steve Hwang and Steven Waller sat down with Massively to deliver both a new teaser trailer and a grim warning: Nothing lasts forever.

Waller began by giving us an overview of what the reoccurring story characters are up to. The five iconic living world leads will be in the thick of things, helping to establish footholds in the besieged city and evacuate the citizens to safety. Braham Eirsson and Rox can be found in the Trader's Forum, near the heart of Lion's Arch. Both characters have been keen to make a name for themselves throughout the story so far: Rox is set on joining Rytlock Brimstone's warband so that she'll no longer be a gladium, while Braham is determined build his legend -- as you do, if you're a Norn -- and step out from under the shadow of his famous mother. With history in the making, it would seem as good a time as any to step into the spotlight, but the gravity of the situation will test them. Rox has agreed to kill Scarlet as the final condition for her membership in the Stone Warband, but in the face of Scarlet's weapons and armies that may be an unrealistic prospect. Braham has cut his teeth defending his hometown of Cragstead, but now he'll need to step up and help defend an entire city.

Marjory Delaqua and Lady Kasmeer Meade of Delaqua Investigations will be helping coordinate efforts near the Lion's Shadow Inn. Jory has always been protective of Kasmeer, who is relatively inexperienced in battle; as the bond between them grows stronger, Kasmeer's strength under fire may be the equalizing force in their partnership. Little Taimi will be in Vigil Keep, where the living world team members hinted that players may learn more about her preoccupation with Scarlet. Taimi is immensely intelligent, but she's still very much a child and has so far lacked some of the experience and perspective needed to grasp the extent of Scarlet's malice.

Other characters you might be used to seeing and overhearing around the city will now have more pressing problems at hand than finding bargains, buying wine, and making trades -- like getting out of Lion's Arch alive after Scarlet turns it into a war zone. Magnus the Bloody-Handed and the Lion's Arch Captain's Council will make an appearance, along with Cutthroat Politics victor Ellen Kiel. And if all this bloodshed and fire gets a bit too heavy, you can keep an eye out for a persistent little robot who has once again changed his job title to something more situationally appropriate. Players last experienced an open world attack on Lion's Arch during the Lost Shores event shortly after launch. Karka swarmed the docks, wreaking havoc as only mutant crabs from the abyssal depths can and destroying the city's historic lighthouse. Although the idea behind the event was ambitious, many players experienced paralyzing lag, disconnects, mysterious disappearing karka and other technical issues.

While some players had already guessed that Lion's Arch will suffer a full-on attack by Scarlet's forces prior to the Edge of the Mists release (in fact, the team gave a special shout out to user Mark_Nutt on Reddit for his early speculation), many others dismissed the idea. What would become of all of Lion's Arch's important gameplay services? What about the personal story steps that take place in the city? After Lost Shores, would ArenaNet create another massive open world attack on a major city? Would they really dare to raze Lion's Arch?

ArenaNet learned a great deal from Lost Shores, Johanson explained, and has spent much of the past year building the necessary technology to help realize the studio's vision of what a living game world should be. All essential services that are unique to Lion's Arch will be redirected to Vigil Keep for the time being, including Asura gates to other cities, Fractals of the Mists, and incarcerated cactus-faced troublemakers. Personal story steps will be accessible through a new entrance. Hwang's team has taken steps to ensure that the city will remain fully explorable for map completion, although if you're especially fond of a particular view...well, you might want to grab screenshots while you can. We were also warned that exploration isn't exactly going to be as safe as it currently is.

Why Lion's Arch? As a historical landmark that has survived two games' worth of trials (albeit rising in a different form at least once), there's arguably no place in the world with greater significance to the races -- and players -- of Tyria. Modern-day Lion's Arch may be a den of ex-pirates and all of the shady dealings that come with them, but it's also a stable home for many and a symbol of unity between the different races. Time will tell whether the loss of that symbol might expose a weakness or become a source of strength.

Hundreds of players gather in Lion's Arch every day to trade, socialize, complete jumping puzzles, and lose their valuables to the cruel whims of some jerk in a forge. ArenaNet has said previously that everything in the living world is open to change; striking at the heart of a city that has been a fixture in the GW2 game experience since the beginning certainly seems to bear that out.

The current direction of the living world story has been deeply influenced by player feedback, and Johanson stressed that as big as the finale of this story arc is ramping up to be, fans can expect even greater improvements in the future, as the fruits of the collaborative development initiative haven't begun to truly affect the game yet.

We'd like to thank Colin Johanson, Steve Hwang, and Steven Waller for their time and demolitions expertise! Be sure to check out the teaser trailer below -- and before any of our readers ask, no, Massively's office sofa cannot accommodate more than five Lion's Arch refugees at this time.

When readers want the scoop on a launch or a patch (or even a brewing fiasco), Massively goes right to the source to interview the developers themselves. Be they John Smedley or Chris Roberts or anyone in between, we ask the devs the hard questions. Of course, whether they tell us the truth or not is up to them!
In this article: anet, arenanet, braham-eirsson, buy-to-play, colin-johanson, escape-from-lions-arch, fantasy, FEATURED, guild-wars-2, gw2, kasmeer-meade, lions-arch, living-story, living-world, lore, marjory-delaqua, ncsoft, rox, scarlet-briar, steve-hwang, steven-waller, taimi
All products recommended by Engadget are selected by our editorial team, independent of our parent company. Some of our stories include affiliate links. If you buy something through one of these links, we may earn an affiliate commission.