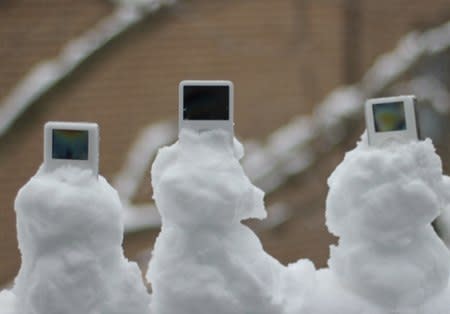 Note: This article contains spoilers regarding the snowboarding competition at the 2014 Sochi Olympics, which has not yet aired in some regions. If you want to watch the broadcast and pretend it's live, stop reading now.

Really not kidding, there are spoilers below. Don't keep reading. In fact, we're going to put some of the spoilers in white text so you're less likely to see them -- if you really want to see them, select the text.

If you spend some time watching NBC's Olympics broadcast tonight you're probably going to hear plenty about "iPod." In fact, "iPod" is now an Olympic medalist in the sport of snowboarding -- more specifically in the halfpipe event.

You see, "iPod" is actually Swiss Olympian Iouri Podladtchikov, and he took home the gold medal, with two-time gold medalist Shaun White getting shut out of the podium, landing in fourth place. (That's where the spoilers are. Last chance to skip them.)

As TV announcers and sports writers tend to do, they've given Podladtchikov a funky nickname. In this case it's the rather fitting moniker "iPod," and since he was so successful, they're sure to be talking about him quite a bit tonight. So when you hear NBC's commentators musing about how skilled an Apple music player is on halfpipe (as opposed to the pan pipes), now you know why.

In this article: Iouri Podladtchikov, ipod, olympics, snowboarding, sports
All products recommended by Engadget are selected by our editorial team, independent of our parent company. Some of our stories include affiliate links. If you buy something through one of these links, we may earn an affiliate commission.
Share
Tweet
Share