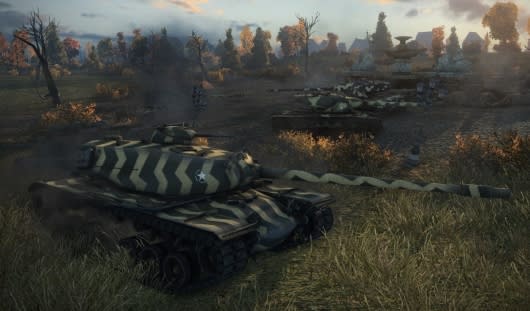 World of Tanks is rumbling for a tumbling with Update 8.11 this week. The patch, which is being rolled out worldwide over the course of the week, has a new "experimental" mode that throws nations against each other.

The Confrontation mode groups vehicles from a specific nation against similarly tiered vehicles from another nation to see who ends up the victor. Wargaming was quick to point out that it had yet to balance this mode and that Japanese and Chinese vehicles are not available in these fights.

There's more to Update 8.11 than the Confrontation mode, however. The team's added Windstorm, a new European winter-themed battle arena, and revamped the Ruinberg and Himmelsdorf maps.

[Source: Wargaming press release]
In this article: 8.11, 8.11-update, confrontation-mode, f2p, free-to-play, historical, patch-8.11, pvp, tank, tanks, update-8.11, war, wargaming.net, world-of-tanks, wot
All products recommended by Engadget are selected by our editorial team, independent of our parent company. Some of our stories include affiliate links. If you buy something through one of these links, we may earn an affiliate commission.