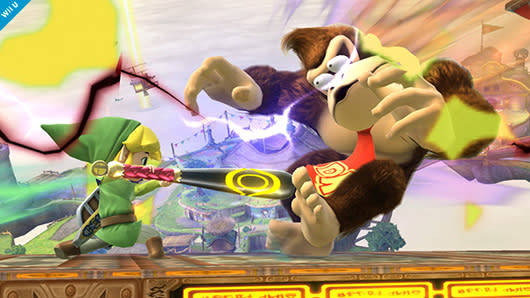 In the latest pictorial tease from Super Smash Bros. director Masahiro Sakurai, we're introduced to the new, black home-run bat. According to Sakurai, this new bat is "so powerful that your eyes might bug out," a sentiment that would seem hyperbolic if it wasn't for Donkey Kong amply demonstrating exactly that kind of ocular ejection.

While this image doesn't tell us much about the latest incarnation of the home-run bat, it's good to see the classic weapon return. No matter which Smash Bros. entry you pick up, you can always depend on the bat to be an intuitive weapon that doles out huge amounts of punishment and has a tendency to launch characters into the stratosphere. Past the break you'll find a second image which shows just that.

Now that the bat has been confirmed the question becomes whether or not the upcoming Wii U and 3DS Super Smash Bros. sequels will feature the fan-favorite Home-run Contest. Unless Sakurai generously reveals the game mode in an upcoming screenshot dump, we may not see an answer until those games debut later this year.
[Image: Nintendo] In this article: 3ds, bat, donkey-kong, home-run-bat, home-run-contest, nintendo, super-smash-bros, super-smash-bros-2014, wii-u
All products recommended by Engadget are selected by our editorial team, independent of our parent company. Some of our stories include affiliate links. If you buy something through one of these links, we may earn an affiliate commission.