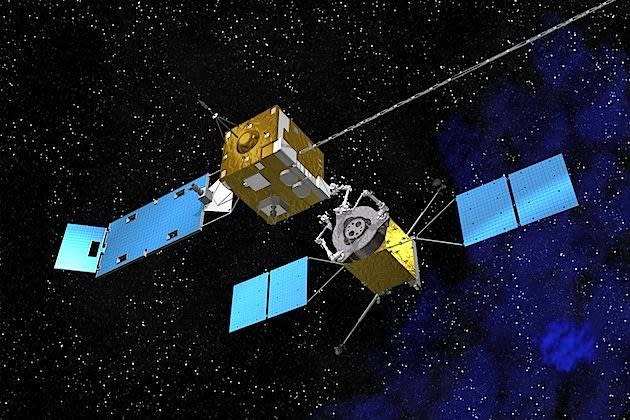 Currently, every satellite put into orbit will become interstellar refuse, destined to be tracked (and perhaps dismantled) by DARPA or eventually disposed of by gigantic lasers (maybe). Naturally, NASA's not so keen on such waste, and it knows that many satellites' shelf lives can be extended with the addition of more fuel. Enter the Remote Robotic Oxidizer Transfer Test (RROxiTT), a project aimed at building a robot platform capable of refilling satellite fuel tanks both on earth and in space.

To make it happen, scientists are working out a method for delivering highly combustible oxidizer (aka a chemical used to ignite rocket fuel) to satellites that were not designed to be serviced. Oh, and they need to be able to do it remotely and safely, of course. And that latter bit is a particular sticking point, as oxidizers are "toxic, extremely corrosive and compressed" according to NASA, which is why the system is being developed for use both on land and in orbit -- why put a human in harm's way when a robot can do the job, right?

The technology needed is being jointly developed by teams from Goddard Space Flight Center in Maryland, which specializes in building the robotic arms and control systems, and a team from Kennedy Space Center. That team has developed a unique oxidizer and fuel delivery and monitoring system that can safely transfer the propellent. Tests of RROxiTT are ongoing, as its creators are working out the kinks of the system here on earth before they try their luck in space.

In this article: fuel, Goddard Space Flight Center, kennedy space center, nasa, refueling, satellite, space, video
All products recommended by Engadget are selected by our editorial team, independent of our parent company. Some of our stories include affiliate links. If you buy something through one of these links, we may earn an affiliate commission.