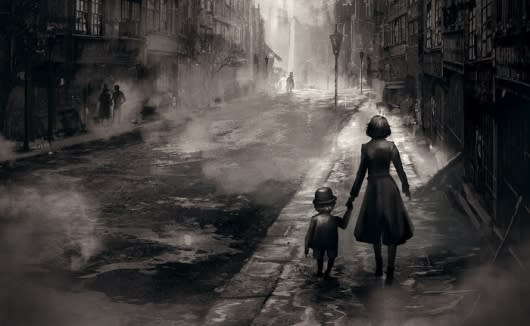 Watching the Kickstarter pitch video for steampunk-themed adventure game Blackmore is like watching your favorite band get back together - if your favorite song by said band was the cyberpunk adventure game Snatcher, that is. Jeremy Blaustein, localizer for Snatcher, Metal Gear Solid and the Silent Hill series, is heading up a new studio called iQiOi in hopes of developing Blackmore, a game he says has been his "dream" since he started working in the industry. His dream has until March 12 to raise $200,000.

Blaustein has tapped several other creators who contributed to Snatcher as well. Satoshi Yoshioka will reprise his role as character designer, while Motoaki Furukawa will handle the game's soundtrack. Blaustein has also recruited David Hayter to voice main character Emma Blackmore's brother, Jonas.

There's no footage or screenshots available yet, though the game's Kickstarter page describes gameplay as "classic point and click" in a isometric-view, 2.5D environment. Players will guide Emma through a gadget-laden, steam-powered vision of 1888 London on a quest to catch a murderer. Those more historically-minded may recognize the date as the year Jack The Ripper began his infamous killing spree.

Should Blackmore pick up enough steam - and money - Blaustein plans to release the game for PC and Mac in spring of 2015.
In this article: adventure, blackmore, david-hayter, jack-the-ripper, Jeremy-Blaustein, kickstarter, mac, Motoaki-Furukawa, pc, Satoshi-Yoshioka, snatcher, steampunk
All products recommended by Engadget are selected by our editorial team, independent of our parent company. Some of our stories include affiliate links. If you buy something through one of these links, we may earn an affiliate commission.