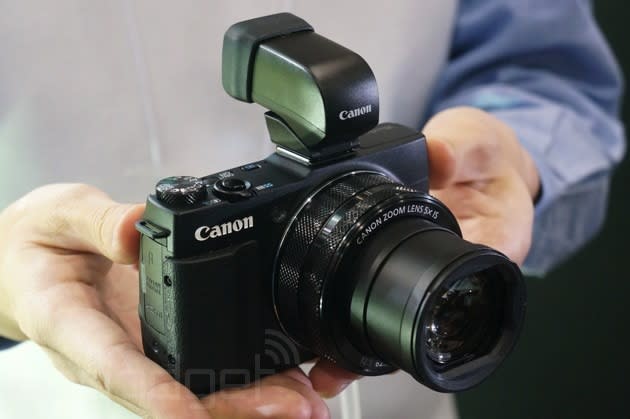 This week, we met Canon's G1 X Mark II. Judging by its nomenclature, we expected a straightforward update to 2012's PowerShot flagship. Instead, this year's model is only like its predecessor when it comes to size -- the camera's specifications and design have been refined significantly. There's no longer an optical viewfinder and the 3-inch touchscreen tilts up and down instead of out to the side, but otherwise, the camera's been modified for the better, with a more powerful 24-120mm f/2-3.9 zoom lens, a new 1.5-inch sensor and a faster DIGIC 6 processor. That powerful combo yields a much more capable point-and-shoot -- with the Mark II, the G1 X can finally justify its $800 price.

We caught up with the Mark II at the annual CP+ trade show in Yokohama, Japan, and while we weren't entirely convinced of the camera's practicality based on press photos and a spec sheet, a few minutes of shooting helped seal the deal. This G1 X refresh was comfortable to use and very responsive, from the speedy zoom toggle to the super-fast focusing. The LCD was quite sharp and bright, and while we missed having an optical viewfinder to play with, the boosted functionality in other departments made the tradeoff worthwhile. (Canon's also planning to offer an external electronic viewfinder -- pictured above -- which seems like a reasonable compromise.) We did struggle with focusing in macro mode, just as we did with the original X, but the lens performed quite nicely with subjects a bit more in the distance, so if you're not planning to shoot close-ups of flowers, you should be fine. Video shooters beware: while there is support for 1080/30p captures, there's no microphone input or headphone jack.

In this price range, we're still inclined to recommend Sony's RX100 Mark II, despite its slightly smaller 1-inch sensor. We haven't had a chance to review full-res images from the Canon, but based on the Sony camera's superior focusing and compact size, it's likely the better choice for many photographers. That model's available now for $700, while the $800 G1 X is expected in stores this April. Check out our hands-on video for a closer look. In this article: camera, cameras, canon, cpplus, cpplus2014, g1x, g1xmarkii, hands-on, powershot, video
All products recommended by Engadget are selected by our editorial team, independent of our parent company. Some of our stories include affiliate links. If you buy something through one of these links, we may earn an affiliate commission.