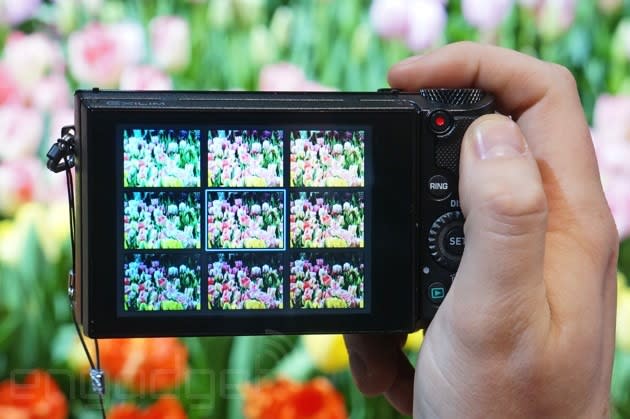 Casio, famed creator of nostalgic digital watches, calculators and often unremarkable point-and-shoot cameras, just surprised us at Japan's premier photography show. Its EXILIM EX-100 is arguably the most interesting compact camera we found on the CP+ show floor this year. Keeping a constant f/2.8 aperture while still offering 10.7x zoom should mean plenty of light reaches the point-and-shoot's imaging sensor -- good thing that the show floor had a suitably stylish demo area to zoom into and see how it fared. While we didn't have samples to scrutinize fully, we were pleasantly surprised by the results we saw on the substantial 3.5-inch screen, which articulates in all the directions you'd expect it to. Underneath, there's even an extra fold-out stand to prop the camera up both horizontally or vertically, although we'll admit the device itself is a little chunky compared to the competition.

What really interested us was a new dual-bracketing setting that captures a shot nine times, varying two parameters (white balance, exposure, focus, color saturation, shutter speed) in the process. In short, making it harder to flub a shot if whoever's holding the camera doesn't quite get the fundamentals. While there are four presets, you can pick which variables are switched up within the "premium bracketing" mode. The camera launches at the end of March, but the decent fixed lens and unusual software talents don't come cheap; 89,000 yen ($873) puts the EX-100 in a pricier... bracket than current favorites like Sony's RX100M2 ($750), and a similarly specced Olympus Stylus 1 ($700). For now, it also remains a Japan-only prospect. In this article: camera, casio, compact, cpplus, cpplus2014, ex-100, exilim, exlimiex-100, hands-on, video
All products recommended by Engadget are selected by our editorial team, independent of our parent company. Some of our stories include affiliate links. If you buy something through one of these links, we may earn an affiliate commission.