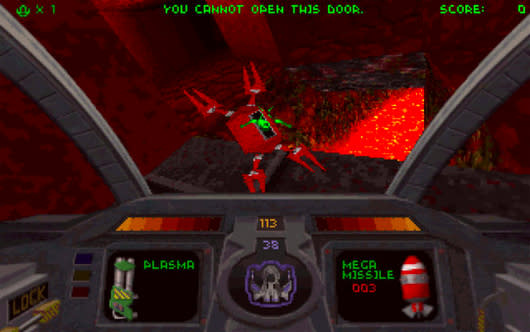 Iconic 3D first-person shooter Descent has finally arrived on Steam. Normally priced at $7, Descent is on sale for $3.49 until February 18 as part of a special launch promotion and compatible with Windows PC only.

The plot of Descent revolves around an alien computer virus that has managed to infect off-world mining robots. Players assume the role of a mercenary, hired to investigate the disturbance for the company and eliminate the alien threat.

And, as Rock, Paper, Shotgun points out, the original Descent will turn 19 tomorrow. While we'd like to make a big deal about it, Descent isn't old enough to enjoy a crisp Appletini on an Autumn's day like a real adult so therefore we can't be expected to take this milestone seriously. Hit us up when you're 21 years old, Descent.
[Image: Interplay]
In this article: descent, interplay, parallax, pc, steam, valve
All products recommended by Engadget are selected by our editorial team, independent of our parent company. Some of our stories include affiliate links. If you buy something through one of these links, we may earn an affiliate commission.