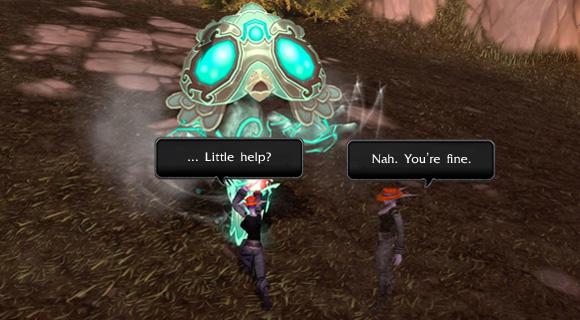 Every week or two, WoW Insider brings you Encrypted Text for assassination, combat and& subtlety rogues. Scott Helfand (@sveltekumquat) will be your shadow on this treacherous journey; try not to keep your back turned for too long, and make sure your valuables are stashed somewhere safe.

When a WoW game designer sends out nearly two dozen tweets in an hour about a talent, you know he's really excited about it.

Such was the case last week with Technical Game Designer Chadd Nervig (@Celestalon), WoW's torch-bearer on class design issues since Greg "Ghostcrawler" Street's departure from Blizzard late last year. Celestalon treated us to an epic twitversation about the upcoming Level 100 rogue talent Shadow Reflection -- one of the most involved, intricate discussions any WoW designer has ever had with us regular folk on Twitter. "It has pretty crazy potential," he said at one point in the conversation.

Celestalon is clearly psyched about what Shadow Reflection will bring to the rogue class. The question is: Should we be as pumped?


How Shadow Reflection Will Work

@SvelteKumquat Yeah, it has a really fun kit to it too; it's like you're teaching a pupil the best combo you know.

We got our first glimpse of Shadow Reflection at BlizzCon, where we saw tooltips of the new Level 100 talent tier that awaits us in Warlords of Draenor. Of the three rogue talents we saw, Shadow Reflection looked the most complicated: Once every two minutes, you could cast it on a target -- and when you did that, a shadow of yourself would appear. That shadow would "watch you and memorize your ability usage" for 8 seconds, after which it would perform those same exact abilities on your target.

Monkey see, monkey do -- with an 8-second delay.

That was all we knew about Shadow Reflection until last week, when Celestalon filled in many of the gaps about how it'll work. Or, at least, how he's currently thinking it will work -- remember, we are still a good long way from Warlords being released, and anything can change before then.

Here are some of the highlights regarding what damage Shadow Reflection will copy:As for how your shadow will throw its shade, here's the gist:
A Shady Outlook

@SvelteKumquat Shadow Reflection, at the moment. Customizing what it copies, and ensure it benefits from other passives. We'll get it right.

So: Is this follow-the-leader fun, or is it folly?

Well, it's definitely interesting -- and it's also super-complicated. I only touched on some of the most noteworthy details above; Celestalon discussed several more in his tweets last week, and yet many more questions remain. (We'll no doubt begin to learn the answers to those -- for instance, can your shadow be stunned or disarmed? -- when we finally see this sucker in action after the beta begins.)

The good news is that, unless you're a seriously competitive PvP or PvE player, you don't need to sweat the tiny details too much. On the most basic level, this promises to be a fun, unique ability that has an immediate, extremely noticeable effect on your gameplay -- and that hopefully has a noticeable visual effect as well.

The feedback I've seen so far, in the wake of Celestalon's revelations, has been limited -- but what little I've seen has been highly critical. Folks who are deeply into raiding aren't too excited about it; they feel that each raid fight will have a "best way" and a "best time" to use Shadow Reflection for optimal DPS (assuming a fight allows us to use it effectively at all), and thus it'll be just another cooldown to use. (Plus, unless Blizzard makes serious inroads against all the screen clutter around rogues in most raid fights, we won't even be able to see our shadow.)

Meanwhile, competitive PvPers have expressed concern that this will only exacerbate an "all or nothing" approach to arena. If timed well, used cleverly and perfectly executed, Shadow Reflection could be incredibly destructive in arena -- it can allow for some crazy burst damage, extensive crowd control or a brutally crippling combination of crowd control and burst. But it's oh-so fragile, and if it's used imperfectly or your target is able to shake your shadow, then it may be curtains for you and your team.

It's also raised worries that it's a little too good a match for the subtlety spec, which is already widely considered the only competitive spec for arena due to Shadow Dance, a powerful burst-damage cooldown with a shorter cooldown time than our other specs' burst cooldowns (Adrenaline Rush, Killing Spree and Vendetta). Shadow Dance currently lasts for 8 seconds -- exactly as long as Shadow Reflection's "learning" period.

Beyond a Shadow of a Doubt

@SvelteKumquat It has pretty crazy potential. I'm especially eager to see what some high end PvPers can do with it, when they get good at...

@SvelteKumquat ...anticipating their enemies actions. It will be very hard to line up, but you could both damage and CC/interrupt with it.

@SvelteKumquat (Of course it has quite solid PvE potential as well, but the things you do with it will be less... unexpected)

I think these criticisms, as well as others I've seen along the same line, are entirely valid and worthwhile concerns. But they don't blunt my excitement for what this talent may be able to bring to the rogue class as a whole, and the fun it may add to the game for anyone who levels their rogue to 100.

In raids, yes, there will likely be a "best" way to use the talent on each boss fight. But that's the way things are now -- and Shadow Reflection still makes executing the "best" way more interesting. It's not just about hitting a single button every couple of minutes and watching your DPS jump. Instead, ideal use of our shadows may mean altering our rotation in unique, strategic ways.

It also will force a rogue raider to be solidly aware of fight mechanics. Is there a new phase coming up soon that will force you out of melee range for a while? If you prepare well and hit Shadow Reflection 8 seconds before that phase begins, you'll be able to run around waving your hands and screaming -- while still dealing 8 seconds of significant damage.

Regardless, raiding ain't the only game in PvEtown. We still don't know everything about the gameplay options we'll have at Level 100, but we do know that open-world questing, Challenge Mode dungeons, Proving Grounds and soloing old raids will all still be there -- and that Shadow Reflection may open up new pathways to success for us in each of these areas, in ways we can as of yet hardly grasp.

Meanwhile, in PvP, I can't speak to the concerns that arena players have raised; I'm no arena expert by any stretch of the imagination, so all of the criticisms may prove true. (Though I do want to note, on the "makes sub the only spec worth using competitively" front, that this may well be exactly what Blizzard intends.) But I also know that arena comprises a small portion of the PvP that folks play. In the organized chaos of battlegrounds, in the winner-take-all realm of duels, or in the unpredictable realm of world PvP, Shadow Reflection may allow for some really inventive, game-changing and downright fun moments. Well, for the rogue and her allies, anyway. <grin>

As I've said, many uncertainties remain with Shadow Reflection. We don't know how well it will hold up under player testing, how well it'll be balanced or whether the designers' vision for it will successfully come to pass. It may not. But that they're willing to give it a shot, and that they're deeply committed to making it work, should make all of us excited for the direction they want to take the rogue class. This hits a lot of the sweet spots we've talked about in recent months -- it's unique, it sounds fun and engaging, and it gives us huge control over the damage we deal.

And if we come across a situation where it doesn't work well? We'll have two other talent choices to use instead -- and those may turn out to be very different than we think.

@Flim_Ascendance Many talents have changed significantly, or been replaced since BlizzCon. Not ready to talk about those yet, though.

Sneak in every Wednesday or two for an early glance at rogues in the upcoming expansion, a look at the eight key things you should keep in mind when leveling your rogue -- and of course, the answer to why we'll always be the bad guys.
In this article: featured, level-100, level-100-talents, level-100-talents-rogue, rogue-info, rogue-talents, shadow-reflection, warlords-of-draenor, warlords-of-draenor-level-100-talents, wow-rogue, wow-rogue-info, wow-rogues
All products recommended by Engadget are selected by our editorial team, independent of our parent company. Some of our stories include affiliate links. If you buy something through one of these links, we may earn an affiliate commission.