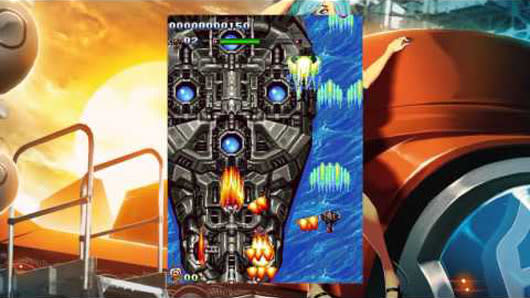 Mere weeks after Redux: Dark Matters made its Dreamcast debut, yet another game is scheduled to launch for Sega's surprisingly healthy 15-year-old console. German studio NG:DEV.TEAM announced that it will release its arcade-style shoot-'em-up NEO XYX for the Dreamcast next week via its online store.

NEO XYX (pronounced "Neo Zaikusu") is a vertically scrolling shooter in the vein of Truxton, Batsugun, and other arcade standouts developed by Toaplan. NEO XYX previously launched as a homebrew release for SNK's Neo Geo console in 2013, though the upcoming Dreamcast edition will be available at a fraction of the Neo Geo version's original price.

NEO XYX will be released on February 17 in standard, limited, and collector's editions.

[Image: NG:DEV.TEAM]
Show full PR text
NEO XYX for Dreamcast™ is will be released on 17th February. A Toaplan style 2D Shoot 'Em Up for Dreamcast™.

The game is released in three versions:

Collector Edition [CE] (limited to 300 units worldwide)
Beautiful DVD slipcase with LE and RE. A T-shirt, two postcards and 4 stickers

About NG:DEV.TEAM
NG:DEV.TEAM (URL: http://www.ngdevteam.com) was founded by the brothers Timm Hellwig and René Hellwig
We are a 2D game developer who is specialized in arcade style games. Since 2010 our games are installed in Japanese Arcade Centers.
We are developing commercial video games on various arcade platforms like NEO·GEO™, Dreamcast, iOS, 3DS and WiiU™.

2012 Release of Gunlord for NEOGEO MVS / AES and Dreamcast

2014 Release of NEO XYX for Dreamcast
In this article: dreamcast, homebrew, neo-xyx, ng-dev-team, ngdev-team, sega, shmup
All products recommended by Engadget are selected by our editorial team, independent of our parent company. Some of our stories include affiliate links. If you buy something through one of these links, we may earn an affiliate commission.