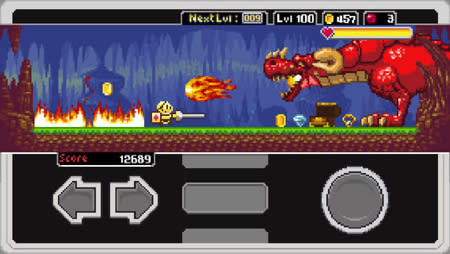 Do you remember the old 8-bit hack-and-slash games? You know, the ones where your little knight or wizard was composed of a total of about a dozen pixels, and they walked in one direction and essentially demolished everything in sight? Slayin' is all of those games, condensed and crammed into a single, frantic all-out brawl.

You never actually go anywhere, but rather navigate a screen-sized chunk of land while enemies pour in from all angles. They crawl up from below, drop in from above and pop up in every corner of the screen. Your job is to dispatch them -- surprise! -- and thanks to several content-filled updates, there are now a total of six playable character classes, each with their own specialty and weakness. The knight attacks with his sword, but is vulnerable from behind; the wizard can become temporarily invincible, but lacks a jump; and so on. The enemies start out mild, but ramp up to be quite formidable. There are also some seriously epic boss fights tossed in to punctuate the action. These battles are nothing to sneeze at, and you might even be reminded of the mind-numbingly difficult battles from the 8-bit generation.

As you progress through the waves of bad guys, your character will gain experience, levels and coins. Your cash can be used at merchants to purchase newer, more powerful weapons and to replenish your health. There's also a type of in-game currency called Fame Points, which are used to unlock things like interface tweaks and additional characters.

Slayin' oozes nostalgic charm and it's a bargain at US$0.99. You simply won't find a better way to relive the joys -- and frustrations -- from the yesteryear of gaming than this.

In this article: daily app, daily iphone app, games, hack and slash, iOS, iphone, newsletter, retro, review, slayin, slaying
All products recommended by Engadget are selected by our editorial team, independent of our parent company. Some of our stories include affiliate links. If you buy something through one of these links, we may earn an affiliate commission.
Share
Tweet
Share