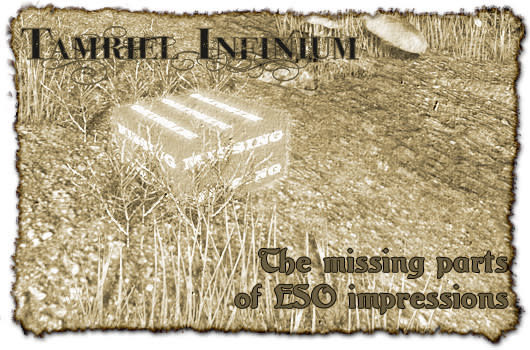 Usually Massively doesn't write second impressions, as it were. We sometimes take older games and play them again. Or we might play a game because it's fun to be led by the hand of our audience. However, once the first impressions are done, they're done. Of course, some games, like The Elder Scrolls Online, are fortunate enough to have a weekly column written about them, and ZeniMax gave the press a second weekend to play the game. Of course, we were supposed to look at PvP, which I did, but I also took this opportunity to play more of the main game, up to level 15.


Before I flesh out my second impressions, let me first address Eliot's article. While my impressions of ESO were not identical to Eliot's, he was also not alone in his opinion even among people who are fans of the other Elder Scrolls games. He laid out specifically his position on the franchise before he started the article; it would have been disingenuous to do otherwise, just as it would be disingenuous of me to pretend I am not a fan. His honest assessment of his background gave you as a reader the chance to say, "I'm in the same position; let me see what he has to say" or "I am not in the same position, so I will likely disagree with his opinion." I say this not to devalue nor discredit his position but to point out that opinions differ even among the Massively staff. Knowing what you know about my background as the columnist covering ESO and Star Wars: The Old Republic, you should consider my opinions with similar weight.

First, I believe the ZeniMax public relations team did the game a disservice by starting everyone at the very beginning of the game. It's possible that the studio wanted to show off the start of the game, but honestly, I believe we have seen enough of the beginning of the game already. Sell us the meat of the game. It would have been more beneficial to give us the ability to start a higher-level character. I was surprised how even the leveling process changed when I completed about half the Stonefall zone of the Ebonheart Pact about level 10.

Let me set up the beginning part of the game so that you know where I'm coming from. If that isn't where you were in the first few levels, then like Eliot you probably won't agree with my opinion going forward. Like most people previewing the game, I found the first few levels to be extraordinarily linear and full of exposition. I would have expected this of a World of Warcraft clone or some other linear, race-to-the-endgame MMORPG. But this is an Elder Scrolls game, one in a long line of games where you can spend hundreds of hours just wandering around doing random things barely touching the main storyline. I expected to be blown away with an open-world and non-linear storytelling right from the start. I was not.

However, I had an advantage over some of my Massively peers: I had already seen the opening sections of each faction a few times before. So my task over the last few weekends was to make sure nothing had changed. (Nothing substantial has changed.) I was able to breeze through major sections of opening areas. I was able to get two characters to level 10 or above, the first being my Nord. Suddenly, when I hit the town of Ebonheart, the feel of the game changed. No longer was I a part of a singular narrative propelling me in predefined direction; I actually had choices about where I should go next.

My characters were members of three different guilds (story guilds, not player guilds -- this is going to get confusing in the future, I foresee). The Fighters Guild, the Mages Guild, and the Undaunted each gave me its own series of quests that would take me all over my alliance's territory. I also had the primary story for the alliance, which gave me breadcrumbs from one area to the next. And then there was my personal story involving the Prophet and the five companions. To top it off, I also met random NPCs scattered throughout the landscape, folks who needed my help doing this or that, as in something like Guild Wars 2. Not to mention the POIs, crafting, and dungeons. And for the real explorers, there are books and other objects that are not on the map, giving tidbits of lore or pretty venues or one-off quests. As a Bartle's "explorer" type, I actually fell in love with the game at this point. I was just disappointed that it took me more than eight hours of gameplay to get to the good stuff.

So now I have renewed interest in The Elder Scrolls Online. Parts of the game feel like neither Skyrim nor Oblivion, but it does begin to feel more like an Elder Scrolls game that you can play with your friends once you've passed the first 10 levels. It's not all MMO, and it's not all Elder Scrolls single-player, but ultimately, it's a balance between the two. And if you can push yourself past the beginning of the game, it works. Next time -- if it's not too late already -- give the press higher-level characters, ZeniMax, because we're still missing too many pieces of the whole puzzle (like endgame).

I spent some time in the Elder Scrolls version of RvR PvP this last weekend, so stay tuned for my video coming later today. We'll also have another impressions piece this afternoon from a writer who focused his attention on the social and crafting aspects of the game. And of course, I also highly recommend you check out our impressions of the game from last week. Four different writers jumped in the beta, and all had different opinions of what they saw, which ought to tell you just how hard it is to quantify an MMO like this one.

Each week, traverse the treacherous terrain of Tamriel with Larry Everett as he records his journey through The Elder Scrolls Online, an MMORPG from ZeniMax. Comments are welcome below, or send a message to larry@massively.com. He promises to keep the arrow-to-the-knee jokes to a minimum.

In this article: bethesda, bethesda-softworks, bethsoft, beyond-level-10, column, ebonheart-pact, elder-scrolls, elder-scrolls-online, eliot-lefebvre, eso, featured, First-Impressions, second-impressions, tamriel, tamriel-infinium, teso, the-elder-scrolls, the-elder-scrolls-online, zenimax, zenimax-online, zenimax-online-studios
All products recommended by Engadget are selected by our editorial team, independent of our parent company. Some of our stories include affiliate links. If you buy something through one of these links, we may earn an affiliate commission.