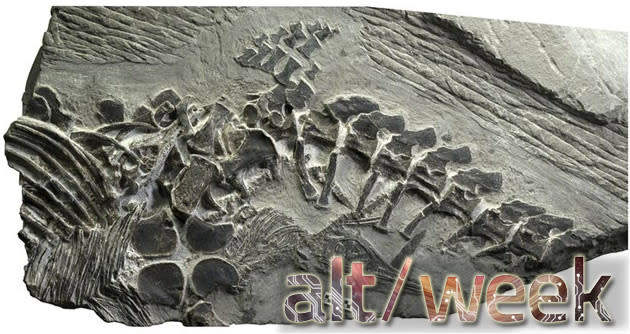 The theme this week has something of an evolutionary tone to it. When did live birth in reptiles really begin? When might we be able to control tiny rockets inside living cells in the body? And, most importantly, how did we start recognising this: :-) as a face? You know the drill: this is alt-week. Emoticons. Now that your mom uses them, not so cool. But we can't deny that we've become accustomed to them through constant bombardment. So much so, that there's no effort required to determine the intended facial expression. It won't always have been like this though, and some scientists in Australia wanted to figure out what was going on in the brain when we decipher them. The work, carried out by a team at Flinders University, Adelaide, wanted to discover whether the now ubiquitous emoticon triggered face-specific mechanisms in the brain, or whether something else was going on. The reality is... a bit of both. Subjects were shown a series of images that included faces, common emoticons and meaningless strings of characters. When the popular smiley combination was shown in its most used orientation [ :-) ] it engaged similar parts of the brain as facial recognition. Interestingly, inverting it ( giving the rather egregious (-: ) the response was much less profound. Something that isn't true for human faces (i.e. we respond the same more or less however they are presented to us). Effectively, the paper suggests that while similar mechanisms ultimately come into play, the difference in recognition between the two orientations, and tests on babies that show zero response to either configuration mean that this definitely a learned response. We thought as much :o)

Get the director of Inner Space on the phone, he's gonna wanna hear this. A team at Penn State University has managed to place a tiny motor inside a living cell (actually many cells), and propel it using an acoustic motor. These "nanomotors" can be guided around the cells, and may lead to a better understanding of internal mechanisms and cell biology. Tom Mallouk, Evan Pugh Professor of Materials Chemistry and Physics at the University even suggests nanomotos could help the fight against cancer by enabling direct access to for intracellular surgery and even drug delivery. Before now, the nanomotors had only been deployed in test environments (and not living cells). The team themselves has made the obvious analogy, hoping that one day it could lead to a Fantastic Voyage approach to medicine, which, while a little creepy to think about, will undoubtedly be more than one scientists' dream fulfilled. If you've ever accidentally left your camera set to a second-long exposure, you know that even that short amount of time makes it almost impossible to capture moving action with any clarity. Fossils -- nature's photography if you will -- are dependant on even more delicate and variable conditions (not least the chance an animal might expire at the right time and location, and nothing else finds it first). That's what makes this image of an ichthyosaurs (a Chaohusaurus marine reptile) giving birth all the more astonishing. Not only is it impressive for the moment it captures, it's also the oldest known evidence of live reptile birth -- proving that vivipary had been taking place much longer than previously believed. The fossil site suggests the mother was on terra-firma at the time of her demise, which also indicates that live birth was something that may have evolved on land, rather than in the water as previously believed. The 248-million-year-old fossil is from the Mesozoic era which spans 252 to 66 million years ago and actually shows three embryos in total. One inside the mother, one exiting the pelvis, and another fully outside.

In this article: alt-week, altweek, video
All products recommended by Engadget are selected by our editorial team, independent of our parent company. Some of our stories include affiliate links. If you buy something through one of these links, we may earn an affiliate commission.