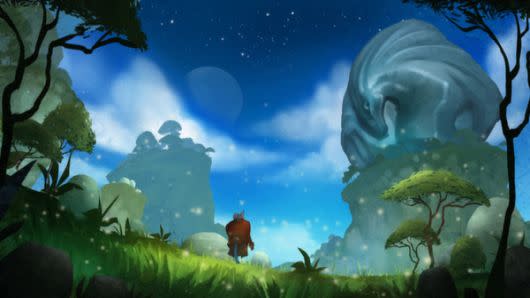 It may not technically be an MMO, but we thought that Hidden Path Entertainment's "social sandbox creation" game, Windborne, might pique your interest. The game, which is now available via Steam's Early Access program, allows players to explore "an infinite number of islands, each full of wonder and surprise," on which they (and their friends) can utilize "a wide variety of building materials, furnishings, and artifacts" in order to build new civilizations and alter the world as they see fit. They can also befriend and trade with the island natives, creatures called the Jin, and the current build also boasts a "basic quest system," which gives players a "guided tour" of the game to help them gain their footing in this new world.

Windborne's Steam page also outlines a number of features planned for the game's future development, such as the ability for players to help "guide the Jin to civilization" by protecting and defending them. Future updates will also add "millions of ruins filled with puzzles and treasure," dragons that can be tamed, bred, and ridden as mounts, and combat and quest systems. One last planned feature that should appeal to MMO fans is the implementation of systems to allow players to see the islands of other players surrounding their own and visit neighboring islands where they can trade, build, and generally interact with the islands' owners. If that sounds up your alley, Windborne is currently available on Steam Early Access for $29.99 US, though the game is on sale for $23.99 until February 24th. To read (and watch) more about the game or pick it up for yourself, check out Windborne's Steam page at the link below.
In this article: early-access, hidden-path, hidden-path-entertainment, multiplayer, online, online-multiplayer, sandbox, social, social-sandbox, steam, steam-early-access, windborne
All products recommended by Engadget are selected by our editorial team, independent of our parent company. Some of our stories include affiliate links. If you buy something through one of these links, we may earn an affiliate commission.