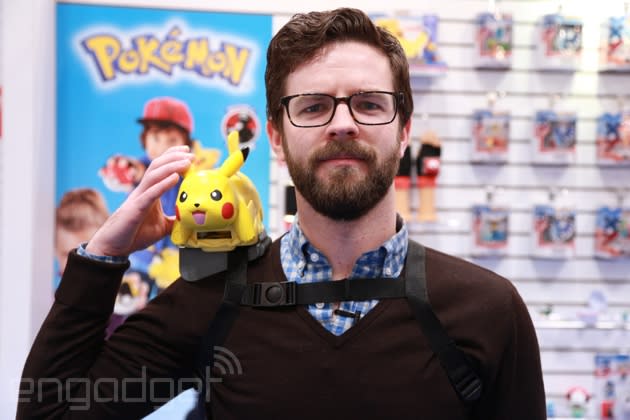 To say the least, there's always something peculiar to be found at Toy Fair. Put simply, this place is guaranteed fun. It's like being five years young and stepping into a Toys R Us for the first time ever -- except there's much, much more stuff here. Toy Fair 2014, hosted at the Javits Center in New York City, definitely lived up to the hype. There were more toys to see and play with than you can imagine, some of which are available now, while others are due to hit the market later this year.

Naturally, we took a stroll through the show floor and found a few neat things: TOMY's new motion-controlled Battroborg Warriors, MOSS has a kit to help make your robot-building dreams come true and a shoulder-strapped Pikachu that shoots foam discs. Oh, and how could we forget Barbie's pooping canine -- yes, folks, that's a thing. Of course, this is only a small taste of everything Toy Fair has to offer, but the photos and videos after the break should sum up what the experience is like. Terrence O'Brien and Daniel Orren contributed their magic to this post.

In this article: Barbie, Pikachu, Pokemon, Toy Fair, Toy Fair 2014, ToyFair, Toys
All products recommended by Engadget are selected by our editorial team, independent of our parent company. Some of our stories include affiliate links. If you buy something through one of these links, we may earn an affiliate commission.