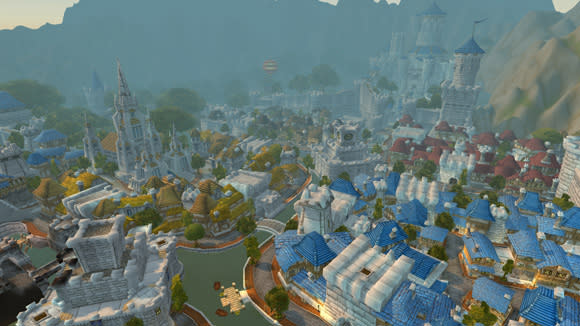 Thanks to major events like BlizzCon, as well as an uncanny level of visibility in public forums, interviews and on Twitter, we tend to think of WoW as a personal project run by a very small number of people. Chris Metzen, Tom Chilton, Greg "Ghostcrawler" Street -- these folks have received a fair amount of the praise, and virtually all of the blame, for nearly every good and bad thing we perceive about the game. And when a change is implemented that we don't understand or disagree with, too many of us often tend to think, "How could they be so stupid?"

The answer, a lot more often than we may be willing to realize, is: The people who make WoW happen are far, far greater in number than the few we see publicly -- and they're just as human as the rest of us.

In the wake of sad news in the gaming world -- Irrational Games, the company that brought us BioShock Infinite, is going poof -- we've been given an important reminder of how huge the gulf can be between our perception of who makes a game come to life and the realities of dame design.


An unusual press release from Irrational cofounder Ken Levine sparked this discussion. Brendan Keogh wrote a poignant op-ed yesterday in The Conversation about that press release and used it to make some really key points that also apply to WoW, along with any other large game (MMO or otherwise). Here's a snippet:

Often, when we play a game and lament about an obviously terrible design decision in one stage and ask nobody in particular "Urgh, why would they design it like that?" the answer isn't that the creators were idiots, but something much more mundane such as: two level designers worked on different floors of the studio, or a post-it note fell off a monitor.

That doesn't excuse a poor design decisions, of course, but I think it is worth understanding and appreciating the very real and often straightforward reasons why something is the way it is: because this thing was made by a large team of dispersed and imperfect humans under actual, boring constraints.

WoW exists on a scale that is absolutely unprecedented in the history of computer gaming: It's a forever-evolving, online universe played by millions, and that requires hundreds of people working full-time (and then some) to keep it functioning and growing. That takes not just a massive amount of resources, but also a stunningly huge level of communication and coordination to ensure that the thousands upon thousands of individual little cogs that make up our WoW experience work as close to perfect as possible.

But we're not Borg. We're human. We're imperfect. And despite our best efforts, stuff happens, or changes need to be reverted.

That doesn't mean we should be complacent when we see mistakes happen. But it also doesn't mean that a problem happened on purpose, or that a change we dislike wasn't thought through, or that the people who bring WoW to us are lazy or negligent or don't play the game or don't care about us players. Odds are really good that the opposite of all that is true. It's just that they're human, like us, and sometimes they (and we) mess up.

This isn't meant to be an apologist rant intended to curb the amount of vitriol that's flung at WoW's most visible designers. I realize this is likely to be interpreted that way -- we're a fansite blog, after all -- but that's not the intent. Nor am I seeking to deflect attention from the realities of our economy and the pressure for gaming companies to make ever-increasing amounts of money.

It's just that, as we bid farewell to Irrational and wish the best for the dozens of people whose lives (and families) have been thrown into chaos due to its closing, it feels like a good time to remind ourselves that these games we play for our own entertainment are put together by living, breathing people. Many of them were once -- and, in the case of Irrational, are once again -- just like we are: Avid gamers who wanted a chance to make something they believe in, and hoped that other gamers out there would enjoy playing as much as they enjoyed creating it.

Guys, can we not turn @Celestalon into the new guy we blame for everything? It was dumb when we did it with @OccupyGStreet and it's dumb now

@The_Chris_B @MatthewWRossi @Celestalon It's more than kill the messenger. There is some drive to blame *a* person, not a group or company.