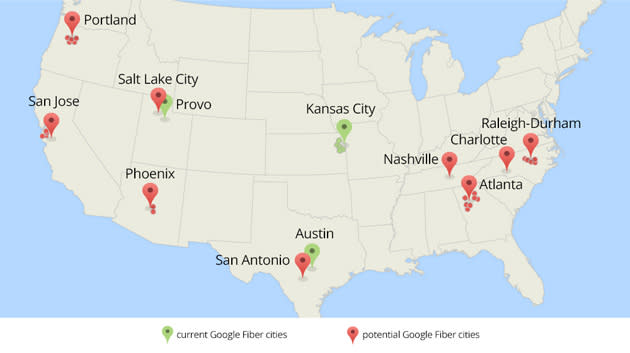 Google has only made plans to roll out gigabit internet access in three US cities so far, but it's not content with stopping there. The company is now exploring the feasibility of deploying Google Fiber in 34 cities located around the major urban hubs of Atlanta, Charlotte, Nashville, Phoenix, Portland (Oregon), Raleigh-Durham, Salt Lake City, San Antonio and San Jose. In each case, Google will work with local officials to both map out its potential network and create a checklist of requirements. The search giant would like to bring Fiber to every one of the cities if possible. Be careful not to get your hopes up, though -- Google warns that it might not be practical to offer service in every territory. Even so, the potential for expansion should prove comforting to Americans worried that they're running out of choices for broadband providers.

In this article: expansion, fiber, FiberOptic, gigabit, google, googlefiber, hdpostcross, internet, isp, networking, television, TL16Gigabit, tv
All products recommended by Engadget are selected by our editorial team, independent of our parent company. Some of our stories include affiliate links. If you buy something through one of these links, we may earn an affiliate commission.