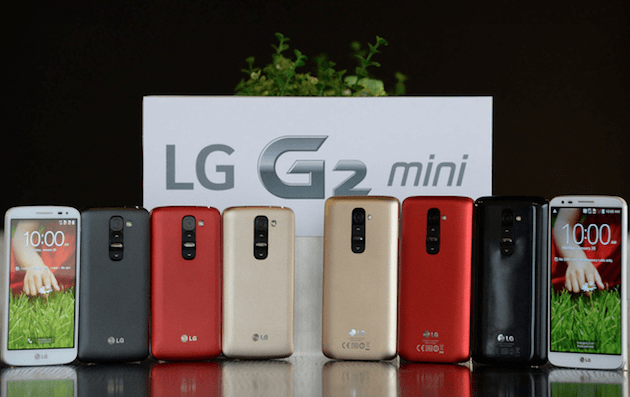 LG's not left much to the imagination before this month's Mobile World Congress. After it confirmed the G Pro 2 last week, the Korean phone maker today officially announced a smaller version of its current Android flagship: the G2 mini. If you were expecting LG to take a similar approach to Sony, which crammed impressive specs into its Z1 Compact, the G2 mini has its fair share of drawbacks. In that regard, the device is powered by Qualcomm's quad-core Snapdragon 400, the same chip found in the Moto G, while its smaller 4.7-inch display boasts a rather unflattering 960 x 540 qHD resolution.

The handset also features 1GB of RAM, an 8-megapixel camera, 8GB of onboard storage, and retains the same unique backside as its bigger brother, where the volume rocker and power button are placed just below the rear camera. LG has, however, equipped the mini with Google's latest OS, Android 4.4 KitKat, and will port its custom knock-to-unlock and Guest Mode features over from the flagship G2. The mini is set to go on sale in Russia from March and roll out across Europe, the Middle East and Latin America shortly after. Given the specs, we're looking at a low-priced handset but we don't know yet how low LG will go. Hopefully it'll share more details at MWC next week.

Update: Now that an official press release has dropped, it's clear that the version of the LG G2 mini destined for Latin America and the Middle East will come with an NVIDIA Tegra 4i chip rather than a Snapdragon 400. We're pretty sure this is the first appearance of that processor in a retail handset, but don't get too excited: the Tegra 4i isn't actually current-gen Tegra 4, but rather a bunch of less powerful Cortex-A9 cores with integrated LTE.

In this article: android, g2, g2 mini, lg, mobilepostcross, mwc2014, smartphone, snapdragon
All products recommended by Engadget are selected by our editorial team, independent of our parent company. Some of our stories include affiliate links. If you buy something through one of these links, we may earn an affiliate commission.