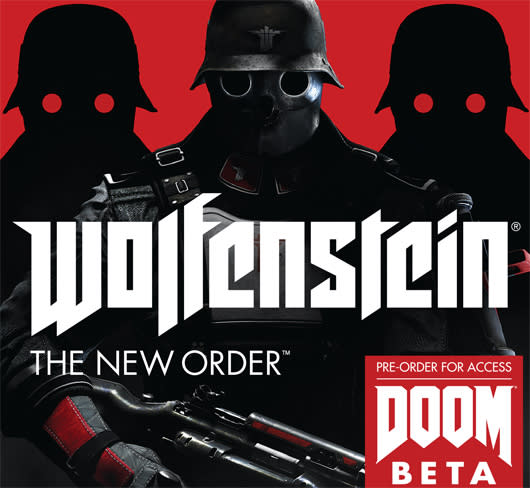 Order up! The next installment in the Wolfenstein series, The New Order, launches on May 20 in North America and on May 23 in Europe, publisher Bethesda Softworks has announced. Wolfenstein: The New Order is the first game from developer MachineGames, founded in 2009 by exiting members of Riddick-dev Starbreeze.

Bethesda also revealed that pre-ordering The New Order will net players an invite to a beta for Doom, which a Bethesda representative tells Joystiq is "the next Doom game from id Software." Developer id Software first announced a new installment in the franchise, at the time titled Doom 4, in May 2008. Since then, id has muttered nary a word about the next game – save for today's news that, yes, it's still in development. Bethesda promises more information on the beta, which has not been dated, on its official site.

Wolfenstein: The New Order focuses on narrative, eschewing a multiplayer mode in favor of a story that revolves around an alt-history 1960s where the Nazi regime had been victorious in their monstrous World War 2 campaign.

The New Order will launch on PlayStation 4, Xbox One, and PC alongside Xbox 360 and PlayStation 3 versions.
In this article: Bethesda-Softworks, MachineGames, microsoft, pc, playstation, ps3, ps4, release-date, wolfenstein-the-new-order, xbox, xbox-one
All products recommended by Engadget are selected by our editorial team, independent of our parent company. Some of our stories include affiliate links. If you buy something through one of these links, we may earn an affiliate commission.