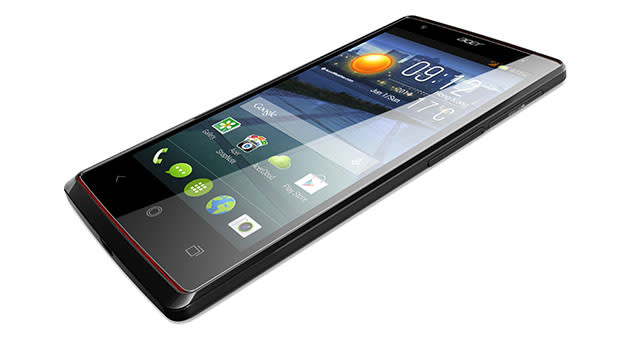 While Acer has made some hay in Europe with low-spec smartphones, its latest budget models are launching into a whole 'nother market. For instance, the €199 ($275) Liquid E3 now has to contend with the likes of the Moto G at €160, while the €99 Liquid Z4 ($135 or so) has an endless conga line of budget devices to compete with. That said, the Liquid E3 (above) at least punches in its weight class with the 4.7-inch, 720p IPS screen, quad-core 1.2GHz CPU, 1GB RAM and 13-megapixel rear/2-megapixel front cameras -- but it's in tough with only 4GB of storage versus 8GB for the Moto G. Meanwhile, the cheaper Liquid Z4's main claim to fame is its 5-megapixel f/2.4 camera, as the rest of the specs (dual-core 1.3GHz processor, 4GB storage) are decidedly downmarket. Both devices will arrive in Europe in April with lowly Android 4.2.2 and no mention of LTE support. As is usual with Acer, don't count on it coming to the US.

Update: At least we now know why there was no mention of LTE support -- they don't have it.

In this article: 13-megapixel, 4-inch, 4.7-inch, acer, AcerFloat, budget, LiquidE3, LiquidZ4, mobilepostcross
All products recommended by Engadget are selected by our editorial team, independent of our parent company. Some of our stories include affiliate links. If you buy something through one of these links, we may earn an affiliate commission.