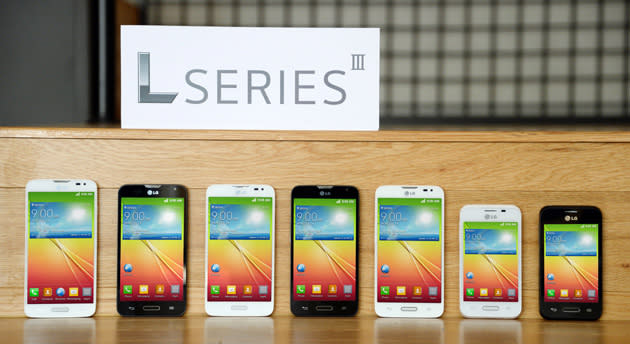 LG isn't just bringing high-end smartphones like the G Pro 2 to Mobile World Congress -- it's also launching its L Series III phones for the budget-minded among us. The 3.5-inch L40, 4.5-inch L70 and 4.7-inch L90 are subtle evolutions of the Optimus L II range in terms of hardware. All of them sport faster 1.2GHz dual-core processors and refined designs that are more in line with the company's higher-end devices. There's a larger 1GB of RAM on the L70 and L90, too. However, the real stars of the show are the L Series III's software and accessories. They're some of the first big-name budget phones to run Google's efficient Android 4.4 KitKat; they're also LG's first non-flagship devices to support optional Quick Window covers, letting you check an incoming call without exposing the whole screen. There's no word as to when these third-generation handsets will hit store shelves, although they're built for markets where 3G data is the best you'll get. In other words, don't expect them to reach LTE-obsessed American carriers any time soon.