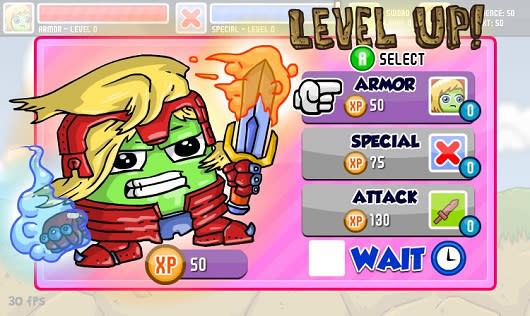 Last year we reported on Super Chibi Knight, an adorable-looking adventure in the Zelda 2 mold that's being developed by Abobo's Big Adventure creator Nick Pasto and his 8-year-old daughter Bella. Nick's on task for the programming nitty-gritty, while Bella provides the voice of the Chibi hero, sketches for character and weapon designs, and she's a valuable playtester - not least because she names the excellent Spelunky, Super Meat Boy, and Castle Crashers in her list of gaming favorites.

Some eight months on, Super Chibi Knight is halfway along in development, and while it's stayed stuck on Steam Greenlight since then, Pasto (senior) tweeted this morning that it's currently ranked #2 in the queue. Everything's looking good for a summer 2014 release for this father-and-daughter game, except for the last bit of funding to get it past the finish line. So, Pasto's turned to Kickstarter with the relatively modest goal of $6,000 to get Super Chibi Knight funded.

The fundraising campaign's already notched a third of that goal at the time of writing, with a healthy 32 days left on the clock. Also, if you want to pledge just a single dollar, Pasto says that if he ever has the pleasure of meeting you in person, you're guaranteed a high five there and then. More guaranteed high fives in the world can only be a good thing.
[Image: Nick Pasto]
In this article: armor-games, kickstarter, linux, mac, nick-pasto, pasto-force, pc, steam, steam-greenlight, super-chibi-knight
All products recommended by Engadget are selected by our editorial team, independent of our parent company. Some of our stories include affiliate links. If you buy something through one of these links, we may earn an affiliate commission.