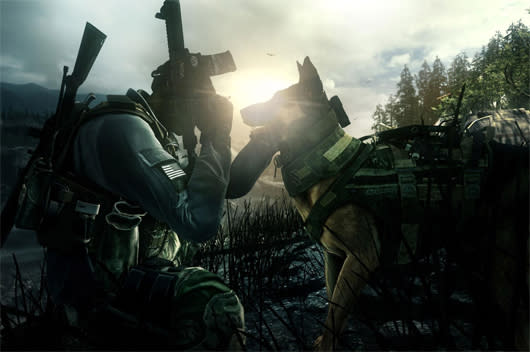 Steam is making a strong case for a mini-staycation this weekend. Festivities kick off today with the Ubisoft Publisher Sale, which lasts until February 24 and offers discounts of up to 75% across just about every Ubisoft game on Steam. Daily deals, additional discounts on select games, will further add to the temptation to spend.

Don't want to spend any cash? Steam thought of that. Both Orion: Dino Horde, a multiplayer shooter that pits man against dinosaur, and Call of Duty: Ghosts, a game that pits Riley the dog against helicopters, are free to play this weekend. Should you wish to buy after you try, Orion is available for $1 and Ghosts is reduced to $30.

Finally, Bohemia Interactive's military sandbox game Arma 3 is 40% off this weekend and available for $36. The game features a variety of single-player and multiplayer operations, and allows active personnel to edit certain gameplay scenarios and employ custom mods.
[Image: Activision]
In this article: activision, arma-3, bohemia-interactive, call-of-duty-ghosts, infinity-ward, mac, orion-dino-horde, pc, spiral-game-studios, steam, steam-weekend-deal, ubisoft
All products recommended by Engadget are selected by our editorial team, independent of our parent company. Some of our stories include affiliate links. If you buy something through one of these links, we may earn an affiliate commission.