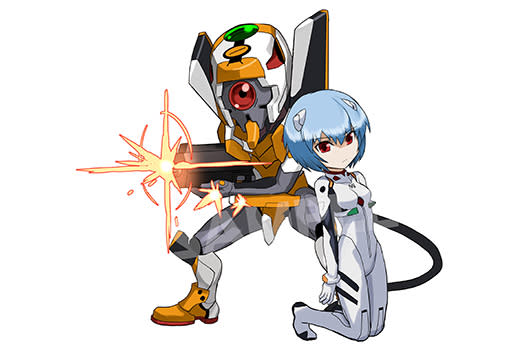 Having already joined forces with Batman and Hello Kitty, hyper-addictive puzzle roleplaying game Puzzle And Dragons will next feature the giant robots and angsty teens of the Evangelion anime series.

The event begins on February 24 in Japan, with the rest of world following suit in March. As with the previous crossover efforts, this event will see Evangelion characters appear in the game as party members with their own, unique sets of attacks and abilities. Puzzle And Dragons will also receive a new Rare Egg machine shaped like the EVA-01, as well as an unknown number of Evangelion-themed Ultimate Evolutions.

Like all Puzzle And Dragons crossover events, this new content will be added to the game at no charge to players. That said, this is a promotional effort designed to highlight the ongoing Evangelion reboot, Rebuild of Evangelion, so don't be surprised if you find appropriate ads within the puzzle hit.
[Image: GungHo Online Enertainment]
Show full PR text
EVANGELION COLLABORATION COMING TO PUZZLE & DRAGONS

TOKYO - Feb. 20, 2014 - GungHo Online Entertainment, Inc., a multiplatform publisher for the online gaming community and publisher of the highly successful mobile title Puzzle & Dragons, today announced that its newest collaboration with the popular film series, Rebuild of Evangelion, is set to take place beginning Feb. 24in Japan and in March in the US and Europe.

The latest in-game collaboration for Puzzle & Dragons is a must for Anime and Evangelion fans around the world. Puzzle & Dragons players will be able to battle in a special Evangelion-themed dungeon where they will face off against the mysterious Angels.

In addition, a special Rare Egg machine shaped like the EVA-01 will be featured in the game. Special egg drops will include popular Evangelion characters Shinji, Rei, Asuka, Mari and Kaworu, depicted with the EVA units they pilot, along with a depiction of Misato with the AAA Wunder flying battleship. Special Awoken Skills have been added the collaboration monsters, and all new Evangelion-themed Ultimate Evolutions will be available.

Assets can be found here

Evangelion sparked a pop culture phenomenon with the release of the original animated TV series in 1995, with the project soon branching out into comics, films, videogames, and other media. The Rebuild of Evangelion film series launched in 2007, and with three installments released to date, Evangelion continues to enjoy a great deal of popularity among a diverse audience. Released last autumn, Evangelion: 3.0 You Can (Not) Redo attracted 3.8 million viewers and more than 5.2 billion in box office revenue. DVD/BD sales of the Rebuild of Evangelion film series alone exceed 2 million units sold. Last month, serialized publication of the Neon Genesis Evangelioncomic concluded after 18 years, with the first 13 volumes in the series exceeding a total of 23 million units printed. The excitement surrounding the Rebuild of Evangelion films continues to build with the approach of the next installment, the series climax.

For information on GungHo Online Entertainment America, visit www.gunghoonline.com. Fans can also follow the latest Puzzle & Dragons news on Facebook and Twitter.
In this article: evangelion, heavy-gear, ios, ipad, iphone, mechs, mobile, puzzle, Puzzle-and-Dragons, robots, roleplaying-game, rpg, titans, vertical-tanks
All products recommended by Engadget are selected by our editorial team, independent of our parent company. Some of our stories include affiliate links. If you buy something through one of these links, we may earn an affiliate commission.