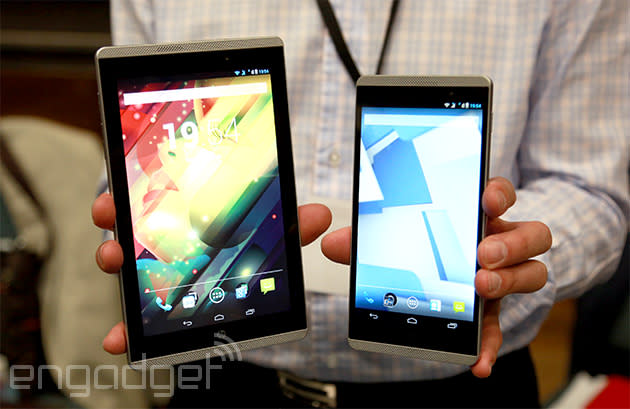 HP turned a few heads when it revealed it would re-enter the high-stakes smartphone market with a pair of voice tablets. The company confirmed the VoiceTabs' existence just after the curtain fell on CES, but HP trotted them out here at Mobile World Congress in Barcelona and we've just had a chance to hold them in our tapas-smeared fingers. Read on for our first impressions on HP's next big mobile gambit. One of the first things you'll notice is just how light both devices are, despite sporting large displays. That's because they're crafted out of what HP refers to as "decorative plastic," and they're serious about the decorative part. There are new color variants on display here, so pink, navy, lime green and purple models will soon hit store shelves.

Both phablets contain the same 1.2GHz Marvell quad-core chipset along with 1GB of RAM, they both feature two SIM card slots, they both come with (lackluster) 5-megapixel rear cameras... picking up on a theme here? Really, the only notable difference between the two is the size of their screens: one has a 6-inch 720p display while the other packs a 7-inch panel running at 1200 x 800. Speaking of screens, they're far from the best we've seen. That's not to say they're bad -- colors and bright if not vivid and viewing angles are solid -- but we've definitely come across better on similarly sized devices.

Thankfully, both of them are running nearly completely clean versions of Android 4.2 (with a KitKat update in the pipeline to boot). Upon closer inspection, the only additional bloat on the VoiceTabs comes in the form of HP's ePrint apps. They're a pretty harmless addition and it's easy to give them the boot if you're dead-set on stock. Fiddling with the phablets was a generally smooth experience, but we did spot just a bit of slowdown while firing up apps. Let's be real though: if you're after screaming performance, you weren't looking at this thing anyway.

According to a kindly HP staffer, the unorthodox approach was exactly what the company was going for. By acquiring Palm and pushing out devices like the Veer, HP was simply trying to play catch-up in a market already full of established players. On the surface, the VoiceTab approach is more of the same -- what company isn't churning out gigantic phones these days? HP's plan here is centered more around how customers can actually get VoiceTabs: direct from the company, with no carriers involved. The tablets are already on sale in Europe with a pre-installed data SIM in tow, and the company plans to do the same for the US by this summer. Whether or not folks will actually take kindly to the curious phablets is another question entirely, but hey, it's hard to imagine HP doing worse at mobile than it has before.

Matt Brian and Sharif Sakr contributed to this report.

In this article: android, hp, phablet, Slate 6 VoiceTab, Slate 7 VoiceTab, video, voicetab
All products recommended by Engadget are selected by our editorial team, independent of our parent company. Some of our stories include affiliate links. If you buy something through one of these links, we may earn an affiliate commission.