Chevrolet unveils convertible and race car versions of its 2020 Corvette 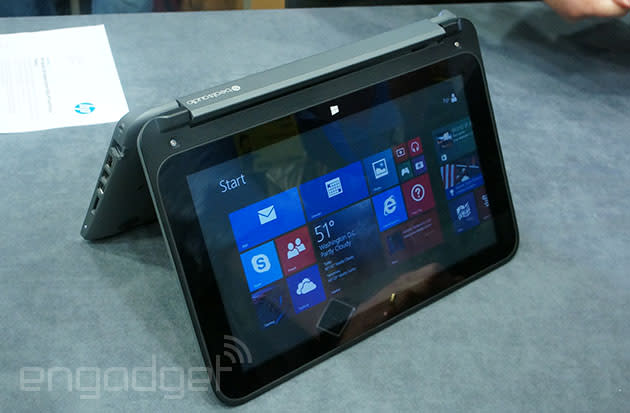 HP just announced its Pavilion x360 convertible laptop, and was in the mood to show it off here at MWC 2014 along with its gigantic new VoiceTab phones. As we noticed earlier, the new devices bear a strong resemblance to Lenovo's Yoga convertibles, but start at a cheaper $399 price point. For that, you'll actually get a nice-looking device in dark silver or red that has a solid-feeling, mostly metal build. You can use it in regular laptop mode or flip the screen around and perch it on the table tent-style to use it in a more tablet-like fashion. As for performance, it's hard to tell with the brief time we had, but the Intel Bay Trail processor, lowish 4GB of RAM and mechanical 500GB don't exactly spell "speed." Nevertheless, it seemed to work well on basic tasks, and the 1,366 x 768 IPS touchscreen was bright and responsive. The red model will hit shelves on February 28th starting at $399 -- for more, see the gallery and video below. 13
In this article: convertible, hands-on, hp, HP Pavilion X360, laptop, pavilion, Pavilion X360, pavillion, video, x360
All products recommended by Engadget are selected by our editorial team, independent of our parent company. Some of our stories include affiliate links. If you buy something through one of these links, we may earn an affiliate commission.