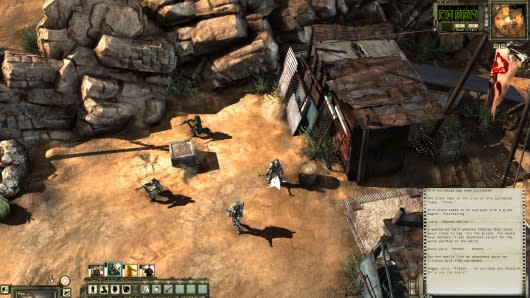 Wasteland 2 isn't ready to travel into the arid, post-apocalyptic desert just yet, but a new beta build set to release tomorrow will allow developer inXile Entertainment to progress ever-closer to a full release.

The team has already addressed more than 1,000 bugs and suggestions (out of 2,300), and with the upcoming build, plan to introduce a new inventory, new locations, changes to existing locations, destructible objects, new combat animations and more ambient sounds. As for when to expect that full-fledged release? "When it's done."

"We know better than to give an exact date at this point because in addition to pushing the game in the ways we'd planned, we're going to continue to incorporate player comments that make sense for us to address," the studio wrote in an update on their Kickstarter page. "But we are in the final stretch, and are thankful our backers have consistently agreed we should take the time we need."
[Image: inXile Entertainment]
In this article: beta, inxile-entertainment, mac, pc, update, wasteland-2
All products recommended by Engadget are selected by our editorial team, independent of our parent company. Some of our stories include affiliate links. If you buy something through one of these links, we may earn an affiliate commission.