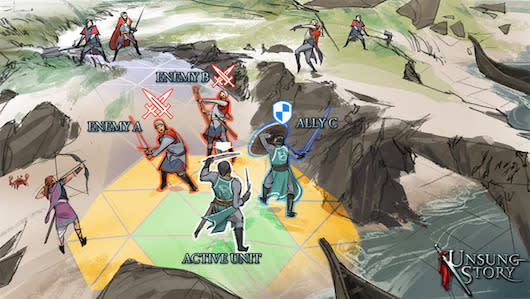 Unsung Story developer Playdek finished its Kickstarter campaign for the game on February 14, pulling in $660,126 for its $600,000 base funding goal. Stretch goals for the tactical RPG are currently beyond the raised funds, but Playdek has opened PayPal donations for fans that want to change that.

Donations won't be based on charity, of course - available rewards include copies of the game, posters, soundtracks, beta access and in-game content. The PayPal page states that the current bundles will be available for two weeks, after which Playdek will "change out the packages."

Various stretch goals include a New Game+ mode, co-operative play, a map creator, ports to the PS4, 3DS and Vita and more. You can check the required funding amounts for each by scrolling down Unsung Story's Kickstarter page.

As it stands, the game is being developed for PC, Mac and Linux and will be ported to iOS and Android devices. Final Fantasy Tactics director Yasumi Matsuno and Bravely Default Art Director Akihiko Yoshida are among the Playdek team, which estimates to deliver Unsung Story to backers in July of 2015.

In this article: android, ios, ipad, iphone, linux, mac, mobile, pc, playdek, unsung-story, unsung-story-tale-of-the-guardians
All products recommended by Engadget are selected by our editorial team, independent of our parent company. Some of our stories include affiliate links. If you buy something through one of these links, we may earn an affiliate commission.