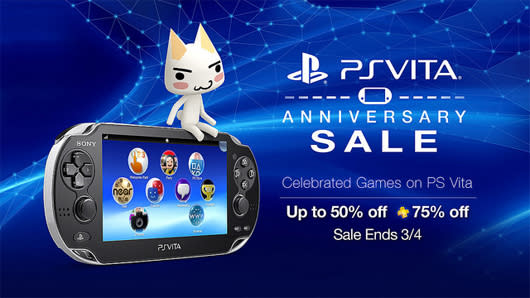 Most birthday celebrations involve a cake, paper hats and some light tomfoolery, but celebrating the life anniversary of an inanimate object is understandably a little less rowdy. The PS Vita enters its third year of existence by slashing prices on a bunch of games, starting tomorrow.

The PS Vita Anniversary sale, which runs through March 3, makes it a good week to be a PS Vita owner. PS Plus subscribers can grab games for up to 75 percent off, while everyone else can enjoy deals of up to half-off. Cheap downloads for Hotline Miami, Escape Plan, Flower, Killzone Mercenary and many more are available. If you're a PS Plus member, you can grab Machinarium for a paltry $1.75.

A supplemental Back to 2013 sale provides further temptations tomorrow with discounts on Dragon's Crown, Guacamelee, Spelunky, Super Motherload and Injustice: Gods Among Us. Many of the PS Vita games are cross-buy enabled, and PS3 users can enjoy discounts on Diablo 3, Ni No Kuni: Wrath of the White Witch, Rayman Legends, Terraria and more.

Both promotions will be active after the PlayStation Store updates tomorrow. There's quite a lot to pore over, so we'd suggest taking a second to review your checkbook first. Checkbooks are still a thing, right?
[Image: Sony]
In this article: back-to-2013, hotline-miami, playstation, playstation-vita, ps-vita-anniversary, ps3, ps4, vita
All products recommended by Engadget are selected by our editorial team, independent of our parent company. Some of our stories include affiliate links. If you buy something through one of these links, we may earn an affiliate commission.