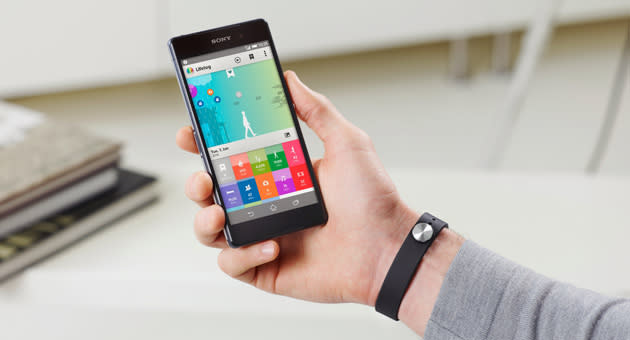 We caught a glimpse of Sony's Core activity sensor back at CES, and it seems the masses will be able to outfit their wrists with one this spring. At Mobile World Congress, Sony announced that the SmartBand (SWR10) that houses the Core and its accompanying Lifelog app will be available in March. If you're in need of a refresher, the Bluetooth and NFC-compatible activity tracker is waterproof with a micro-USB port and will arrive in only in Black... initially. Color options are set to arrive after launch with a 2014 FIFA World Cup model as part of the group. The Lifelog app is the control center for the Core, collecting your daily stats, tracking sleep, logging places and storing other activity on an Android device. Similar to other activity tracking software, Lifelog allows you to set goals and monitor progress right from your mobile device. When you're heading out of range or when you need to get out of bed, the SmartBand will alert you to keep things in check. Tweets, emails, calls and other messages will prompt the SmartBand to vibrate as well. When used alongside Sony's Walkman app, the wearable can be used to play, pause, and skip tracks. Unfortunately, there's no word on pricing, but we're sure to get more info on that when the exact release date is announced.

Update: We've just been informed that when the Core launches in Europe it'll do so for a price of 99 Euros, with the dollar price likely around the same.

In this article: activitytracker, lifelog, mwc2014, smartband, smartbandswr10, sony, video
All products recommended by Engadget are selected by our editorial team, independent of our parent company. Some of our stories include affiliate links. If you buy something through one of these links, we may earn an affiliate commission.