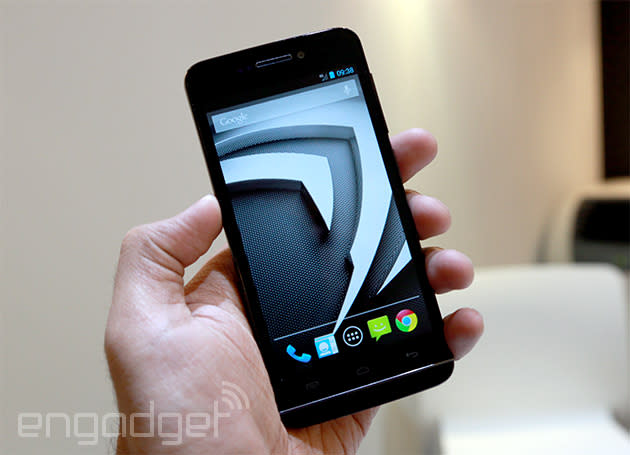 Sorry LG: you may have trotted out the G2 mini yesterday, but yours won't be the first Tegra 4i device to hit store shelves. NVIDIA says that distinction belongs to the Wax, a newly-revealed handset from French phone maker Wiko that should launch in Europe "within weeks." We just spent a few frenzied moments with the Wax at MWC, read on for our first impressions. Like the G2 mini, the Wax packs a 1.7GHz Tegra 4i chipset with 1GB of RAM and integrated LTE support. That's about where the similarities end. The Wax's plastic frame feels incredibly light without dipping into chintziness, a balance that even huge OEMs have trouble nailing. Meanwhile, an 8-megapixel shooter sits high on its back... though picture quality wasn't anything to write home about. Thankfully, the Wax pulls ahead of LG with its 4.7-inch 720p display. Colors were a bit anemic compared to other screens we've seen on mid-range devices, but squeezing those extra pixels in there makes a world of difference.

While LG was dead set on replicating the G2's features on a modestly specced phone, Wiko ran with a stock version of Android 4.3 that seems happy to let the hardware shine through. It's always a little tricky to get a feel for how well a device works in situations like these, but the Wax tackled most of the tasks we threw at it (think opening up apps, swiping through photos and loading websites). NVIDIA claims it's capable of delivering "2X the performance" of the more mainstream Snapdragon 400, but don't let the label fool you. The company ran with less-powerful Cortex-A9 CPU cores in the 4i, so it won't be quite as snappy as the full-blown Tegra 4 devices you may have come across in your travels.

In this article: android, france, mobilepostcross, mwc2014, nvidia, smartphone, tegra, tegra4i, wax, wiko, wikowax
All products recommended by Engadget are selected by our editorial team, independent of our parent company. Some of our stories include affiliate links. If you buy something through one of these links, we may earn an affiliate commission.