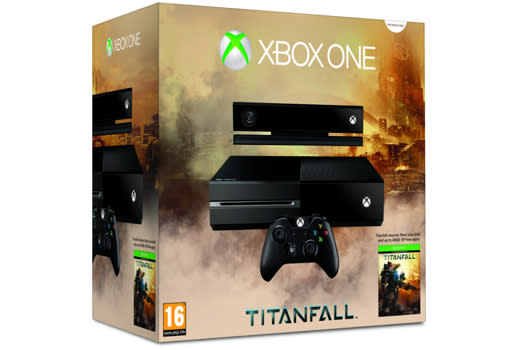 The Titanfall bundle will cost the same amount as the Xbox One system typically does in North America, $499.99, and can be seen on Microsoft's website. Players picking up the bundle next month will receive a download code for Titanfall packed in to the box, as opposed to a boxed, retail copy of the game. The bundle will be available for "a limited time only" at select retailers.

Titanfall is the first game from Respawn Entertainment, the developer created by former Call of Duty veterans Jason West and Vince Zampella in April 2010. West left the developer in March 2013 after the duo settled with Activision in its Infinity Ward lawsuits in May 2012. Those looking for more Titanfall action should look no further than the six-person beta massacre our daring Joystiq editors took part in.

Update: Players can pre-order the bundle through Amazon and the Microsoft Store.
[Image: Microsoft]
Show full PR text
Xbox One now £399.99 (ERP) in the UK from February 28th
Xbox One bundled with Titanfall at no additional cost while supplies last

Harvey Eagle, Marketing Director, Xbox UK said: "At Xbox, we believe there's never been a better time to join the new console generation. To help our fans do just that, Xbox One will be available at the new UK estimated retail price (ERP) of £399.99 from February 28th. And while supplies last, fans will also get Titanfall – the most anticipated game of the year – included in the box."


Xbox One will be available from retailers at the new UK estimated retail price (ERP) of £399.99 from February 28th. Customers can pre-order the Xbox One Titanfall offer from today via http://www.xbox.com/titanfallbundle

To mark today's announcement, here are some of our favourite Xbox One #XboxRecordThat moments so far: http://www.youtube.com/watch?v=Py8MNtDK0HA
In this article: bundle, ea-games, Microsoft, price-drop, respawn, Respawn-Entertainment, titanfall, uk, xbox-one, xbox-one-titanfall-bundle
All products recommended by Engadget are selected by our editorial team, independent of our parent company. Some of our stories include affiliate links. If you buy something through one of these links, we may earn an affiliate commission.