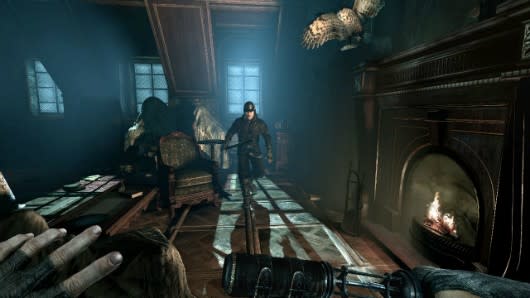 Pizza is great. Everyone loves pizza, even thieves-for-hire. In fact, a well-known byproduct of being a kleptomaniac is an insatiable craving for carbohydrates. A Thief promotion at Newegg capitalizes on this by granting all who pick up a PC copy with a $10 coupon for Domino's Pizza. Enter the promo code SENTFPO during checkpoint for an additional ten percent off.

Thankfully, Newegg has extended some sales love to Thief's other platforms too. Grabbing a copy of Thief on PS4, Xbox One, PS3 or Xbox 360 before March 3 nets a gift card good for $5.

Thief, which launched this week, is a game our review said is "best when it sticks to the involving, slow-paced stealth that made its ancestor such a tense affair." Our review adds, "Thief succeeds when it's quiet, fingers reaching out and almost – almost – touching an irresistible spread of glittering prizes."
[Image: Eidos Montreal]
In this article: dominos, eidos-montreal, microsoft, newegg, pc, pizza, playstation, ps3, ps4, thief-2014, thief-4, xbox, xbox-one
All products recommended by Engadget are selected by our editorial team, independent of our parent company. Some of our stories include affiliate links. If you buy something through one of these links, we may earn an affiliate commission.