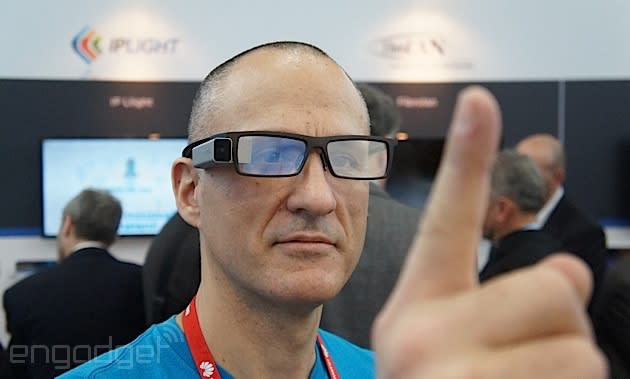 Imagine a pair of Smart Glasses that you didn't need to fondle just to dismiss notifications, or worse, speak out loud to like a crazy. It's that exact thought that brought Lumus and eyeSight together. If you know each company's respective products, you don't have to imagine too hard what's going on, but if you don't? Basically Lumus makes a Google Glass-like product that has a see-through display in one lens that shows notifications, calendar entries and so on. EyeSight makes software that allows gesture control through existing cameras (like that one in your laptop or phone), and has, for example, just penned a deal with Oppo that sees the software baked into its phones' native controls (wave to browse the gallery, etc.).

The collaboration between Lumus and eyeSight was announced here at MWC, and we just swung by to take a look. The Lumus glasses we saw back at CES are unchanged, but this time around, you can dismiss email and social media notifications (for example) with a simple flick, or pull out reminders and calendar entries from the side with a swipe. We were mighty impressed with how well it worked, and how fluid and responsive the interaction was. Of course, this is only a simple demonstration of what is possible, but it's not hard to imagine more creative applications for it further down the line (games, media control, etc.). Of course, some might argue that waving around in the empty space in front of you is no less conspicuous than talking to yourself, but once you've tried it for yourself, we think you'll agree it's a much easier way to interact with a HUD than an out-of-sight touchpad or unreliable voice command. Lumus still hasn't confirmed commercial plans for its glasses, so it could be a while before you decide for yourself.

In this article: dk40, eyesight, gadgetry, gadgets, gear, GestureControl, lumus, mwc2014, timeline16fingerflick
All products recommended by Engadget are selected by our editorial team, independent of our parent company. Some of our stories include affiliate links. If you buy something through one of these links, we may earn an affiliate commission.