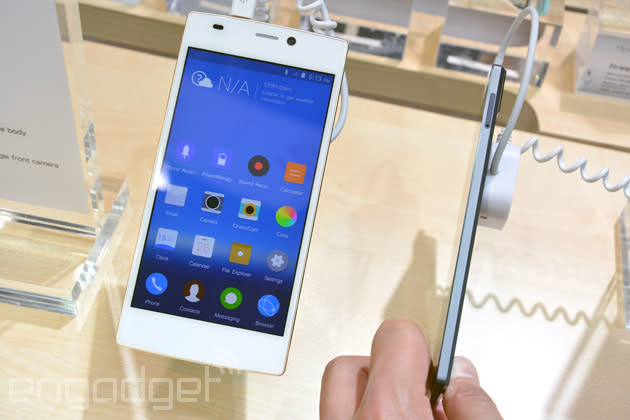 It's only been a week since Gionee debuted its super thin Elife S5.5 Android phone in China, but luckily for us, the company also brought it along to MWC. After playing with the 5.55mm-thick device for some time, we were left very impressed with its build quality. The aluminum frame was nicely machined and felt solid, whereas the Corning glass back panel added an extra premium feel, despite leaving fingerprints behind. We still struggled to believe that there's a 1.7GHz octa-core SoC inside such a slim device, let alone a 2,300mAh battery and two nice cameras -- 5 megapixels on the front and 13 megapixels on the back. It should be noted that the rear imager and its LED flash do stick out a little, but it's not that noticeable in the corner. The S5.5 will come in several colors, with our favorite being the white and gold combo.

We managed to have a quick chat with Gionee's president William Lu, who was amused by how folks from Sony, Samsung and Nokia kept going back to his booth to inspect his company's masterpiece. Well, if they don't mind splashing out about $375, they can grab one for themselves in China come March 15th; but the phone will eventually arrive in other countries (though the US is definitely not on the list). Meanwhile, feel free to check out our hands-on video after the break. 22
In this article: android, china, elife, elifes5.5, gionee, hands-on, mobilepostcross, MT6592, mwc, mwc2014, octa-core, phone, s5.5, video, williamlu
All products recommended by Engadget are selected by our editorial team, independent of our parent company. Some of our stories include affiliate links. If you buy something through one of these links, we may earn an affiliate commission.