IRL: A week with the thinnest phone on the market 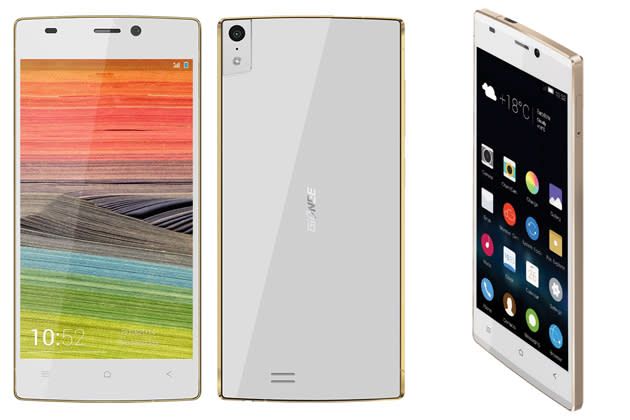 Gionee's trying to stand out from the Huaweis and Oppos of smartphone-mad China with its new Elife S5.5, which it claims is the world's thinnest at 5.5mm. If so, that would edge out the 5.75mm Vivo X3, the current champ (for reference, the iPhone 5s is 7.6mm thick). If "battery life" is the first thing that pops into mind for such a phone, Gionee claims it'll last all day like its (much thicker) flagship, the Elife E7, thanks to a 2300mAh battery. Other than that, it's fairly tame with a 5-inch display of unknown resolution, Gionee's "Amigo" Android-based OS, an unspecified 1.7GHz quad-core CPU, 2GB of RAM and 13-megapixel back/5-megapixel front cameras. The 3G model is now up for pre-order in China for around $370, with an LTE version arriving in June. Gionee also said it'll launch in 40 other countries, though eager small-pocketed consumers will have to wait to find out which.

In this article: ELife, eLifeS5.5, gionee, mobilepostcross, WorldsSlimmest
All products recommended by Engadget are selected by our editorial team, independent of our parent company. Some of our stories include affiliate links. If you buy something through one of these links, we may earn an affiliate commission.